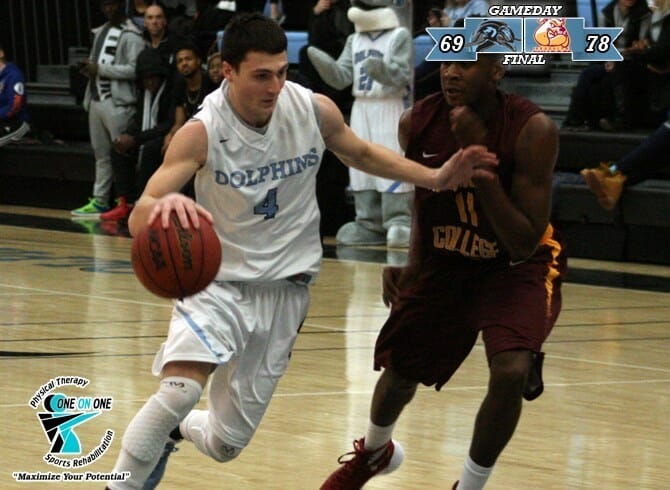 On a night when the College of Staten Island men’s basketball team would suffer one of their worst shooting performances of the season, the Dolphins were ousted from the 2016 CUNYAC / Army ROTC Men’s Basketball Championship Tournament in the Semifinal round by Brooklyn College, 78-69, at the Nat Holman Gymnasium in upper Manhattan. The win advanced Brooklyn (21-6) into the Final with Baruch College, an earlier winner over Lehman College. The Dolphins season finalized at 18-8.

In a sloppy game from start to finish that featured multiple stoppages due to video replay, 29 turnovers, and a total of 65 free-throw attempts, CSI struggled early with their shooting and never could get it right. The Dolphins posted their second-lowest shooting percentage this season at 38.2%, their third lowest shooting performance from beyond the arc at 22.7% (5-22), and their worst shooting clip from the foul line at an anemic 42.9% (12-28). The shooting erased a rather solid defensive evening, one that saw the Dolphins down only one at the break, 29-28.

The low-scoring affair saw CSI retain the lead for a good portion of the first half, taking four point leads on a number of occasions, the last at 6:25 to go when Frank Schettino went on a personal four-point rip to give the Dolphins an 18-14 edge. Brooklyn responded with a 7-0 run, capped by a three-point play by Lorenzo Williams. From there, CSI’s Edin Bracic nailed a pair of three’s on consecutive possessions to swing the pendulum in CSI’s direction, but the Dolphins went the final 2:41 of the opening frame without a field goal, and Brooklyn seized a one-point edge at intermission thanks to a 6-2 closing run.

After holding BC leading scorer Egzon Gjonbalaj to just four first half points, the senior erupted to open up the second half, introducing the stanza with seven straight points on consecutive possessions to help give BC a 40-31 cushion just 2:45 into the half. From there, it was all about CSI trying to claw their way back in.

It got worse before it got better. A Jamel Gist lay-up and a three-pointer by Dillon Williams gave BC their biggest lead, 47-34, with 14:13 to go, a punctuation mark that came after a near five minute delay to review a deadball foul that cost the Dolphins a pair of free-throws and possession. CSI did respond nicely from there, however, powering to an 11-2 run over the next three minutes to cut the BC lead to just 49-45. Will Fonseca and Kevon Murphy powered inside for buckets during the run while Schettino added a big three pointer from the top of the arc. That prompted the first of two instances where the Dolphins cut the lead to four and then managed to get back possession, but both times the BC defense rallied, forced CSI stops and then proceeded to cushion the lead.

Finally, with 2:09 to go, another Schettino three cut BC’s lead to 65-61, but Gjonbalaj went the other way and cut through the CSI defense to score a response layup, and after a CSI miss the other way, Gjonbalaj added a free throw with 1:15 to go to put the Bulldogs up by seven. CSI would cut the lead to five on the next two possessions, but BC’s 10-12 shooting from the free-throw line in the final 50 seconds nurtured the lead, and by the end, BC was able to comfortably take the win.

Lorenzo Williams led all scorers for Brooklyn with 23 points and 11 rebounds, followed by Gjonbalaj’s 20 points and eight boards. The Dolphins got 19 points each from Schettino and Fonseca, with Fonseca adding 13 rebounds and Schettino 10. CSI was able to out-rebound Brooklyn 43-42, but the Dolphins committed 17 turnovers to the Bulldogs’ 12. Brooklyn’s shooting was also poor, as the Bulldogs connected on just 39% of their shots (25-64) and just 25% from three-point range (4-6), but Brooklyn posted 24-of-37 free-throw attempts, good for 65%. The 37 free throw attempts by Brooklyn were the most by a CSI opponent in over six years, dating back to the 2010 season.

CSI fell to 20-9 all-time in CUNYAC Tournament Semifinal games and their loss to Brooklyn is the first in their history (4-1). The Dolphins saw their six game win streak in semifinals play, dating back to 2007, snapped as well.

The Dolphins will finalize their season at 18-8. The Bulldogs will next play Baruch College, and 80-64 winner over top-seeded Lehman College in the CUNYAC Final on Friday evening at 8:30pm.