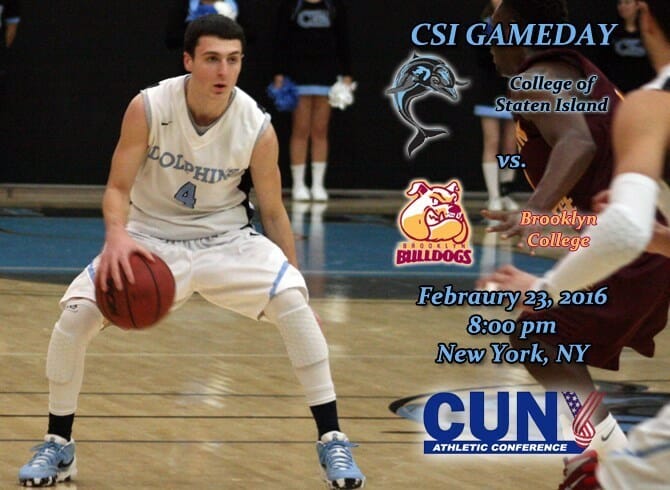 The College of Staten Island men’s basketball team will be ushering in their entrance into the CUNYAC / Army ROTC Postseason Basketball Championship Tonight, as they get set to take on Brooklyn College as part of Semifinal play at the Nat Holman Gymnasium at City College of New York, at 8pm. CSI is the No. 2 seed in the tourney, and a win will catapult them to the CUNYAC Final on Friday. Brooklyn is the No. 3 seed, and earned into the semifinal date with CSI by virtue of their 72-62 win over York College in second round action on Saturday.

CSI vs. BROOKLYN COLLEGE AT-A-GLANCE
Matchup: CSI (18-7 overall, 11-5 CUNYAC) vs. Brooklyn College (20-6 Overall, 11-5 CUNYAC)
Where: Nat Holman Gymnasium – 160 Convent Ave. – New York, NY 10031
Tip-Off: 8:00pm
Ticket Info: http://www.eventbrite.com/o/cuny-athletic-conference-2862211205
Live Stats: http://www.sidearmstats.com/cuny/mbball2/?
Live Video: http://www.csidolphins.com/CSISportsNet
All-Time Series: CSI leads 39-15
This Year’s Result: Brooklyn won 73-70 / CSI won 81-80
Players To Watch (CSI): CUNYAC Player of the Year Will Fonseca needs a single bucket to overtake former Dolphin David Paul for fourth-place on the CSI’s all-time scoring list. Fonseca has 1,683 career markers, and sits 8th all-time at CSI in rebounds with 765 and is 9th in blocks with 82. Meanwhile, junior Frank Schettino is closing in on the school’s all time assists record, sitting 23 shy of Fred Marinacchio’s school record of 586 set in 1991. Schettino needs 11 points to reach 1,100 for his career, which would place him 25th in CSI history. Production from supporting Dolphins players Edin Bracic and Thomas Delahanty will be key for CSI tonight. Over the last two years, CSI is 14-2 when Bracic scores 10 in games, and the team is 17-1 when Delahanty posts 12 points in games. The duo combined for 22 in CSI’s regular season win against Brooklyn this season.
Players To Watch (BC): Point-scoring dynamo Egzon Gjonbalaj is the catalyst for the Bulldogs, averaging 23.2 points and 11.1 rebounds per contest while shooting 49% from the floor. Lorenzo Williams is averaging a healthy 18.8 per game to with 5.5 rebounds, while Jamel Gist is coming off of a 36 point effort against York on Saturday. Look for Williams to be a factor tonight. He led the Bulldogs in scoring in both meetings against the Dolphins this year, and Brooklyn is 5-1 this season and 13-3 over the past two years when he has led the team in scoring.
News & Notes: CSI and Brooklyn have plenty of regular season experience against each other, having met twice yearly since 1997, but have matched up only four previous times in the CUNYAC Postseason. Every one of their four previous meetings came in the Semifinal round with CSI winning all four in 1979, 1981, 2011, and 2013. CSI has gone on to win the Championship in three of those four years. Overall, CSI has won 11 of the last 13 meetings spanning back to 2011, with six of those games decided by six points or less. Prior to this most recent run, Brooklyn had taken six straight in the series from 2007 to 2010.
The Dolphins are 20-8 all-time in CUNYAC Semifinal round games, having won their last six semifinal appearances here at Nat Holman Gymnasium since 2007. Look for rebounds to tell a big story in tonight’s game. The Dolphins are 14-3 this season when winning the battle on the boards and Brooklyn is just as potent scoring a 14-2 overall mark. The teams are just 10-8 when they are out-rebounded in games this season…Both teams will get their fair share of three-pointers off of the ground tonight, and strong shooting from behind the arc has been pivotal for the teams all season. Brooklyn is shooting 35% from the arc this season, and are a perfect 9-0 when shooting over 37% from the arc this season. CSI has been just as lethal, boasting a 38% clip from the arc, and a 9-0 record when connecting on 40% or better from downtown.