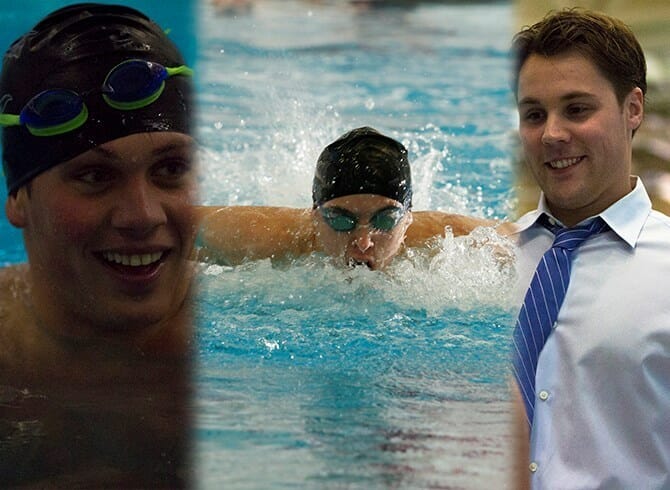 The College of Staten Island men’s swimming and diving program soared to their third straight CUNYAC Championship last weekend at Lehman College, and this weekend the program basked in more CUNYAC honors, sweeping the major awards and collecting five more All-Star citations.  Junior Tim Sweeney rolled to Swimmer of the Year after collecting an MVP performance at the Championship Meet, while freshman Nick Defonte was named the conference’s Rookie of the Year, and Michael Ackalitis the Coach of the Year.  From there, Jonathan Gorinshteyn, Derek Villa, Adil El Haddad, Ayman El Haddad, and Chris Pinto were all named All-Stars on the men’s side.

Sweeney was a sound choice for Performer of the Year.  The junior enjoyed first place finishes in every single one of his races at the CUNYAC Championship, and led the way for CSI with a total of 344 points earned on the team, over 140 more than any other swimmer.  In dual meets this year, he earned 19 first place finishes in 20 individual races.

“It is a great accomplishment that I am very proud and honored to receive. I’ve worked hard all season and to be recognized by all of the coaches in the conference means a lot,” said Sweeney.  “I have to thank my teammates so much for this because they pushed me to be better each and every day. I also have to thank all of my coaches, and (Strength and Conditioning Coach) Mike Wilson because I wouldn’t be swimming nearly as well without them.”

“Winning Rookie of the Year means a lot to me. It helps me realize that the hard work I put in showed this season,” said Defonte about getting the award. “I would not have been able to do it, however, without my teammates pushing me, and my coaches guiding me to be the best swimmer I can be.”

Adil and Ayman El Haddad dominated on the diving boards this season and thus took home all-star citations for their efforts, which included a new three-meter record by Adil at the CUNYAC Championship.

Pinto shared the team lead in top three finishes in relay races with 10, and his 12 top three individual race finishes were near the top of the team as well, earning him 96 season points.

Freshman Gorinshteyn made quite an impression in his debut season, finishing with 107 total points this season, good for sixth on the team.  He led CSI with 10 second-place finishes in individual races, and added five top three finishes as part of relay teams.

Rounding out the collection of awards was another for Head Coach Ackalitis, who understands the value of being named the conference’s Coach of the Year.

“I do not think of this award as an individual award but more of a team award,” said Ackalitis. “It shows how hard my staff and student athletes worked all year to be the best they can be.”

CSI will next send a selection of its athletes to participate in the Metropolitan Swimming and Diving Championships at Rutgers University this coming weekend in Piscataway, NJ.  Those qualifying for NCAA Championship cut times can also go in to compete in the Division III Championships in mid-March.