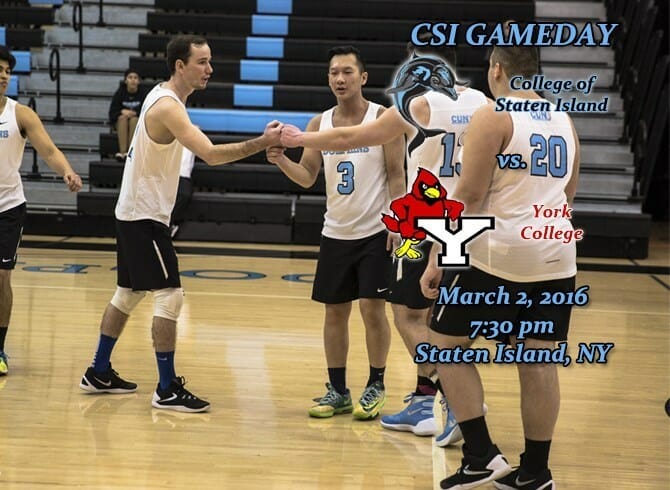 The College of Staten Island men’s volleyball squad returns to CUNYAC action tonight after playing six straight non-conference opponents. The men most recently lost back-to-back matches in a tri-match at NJCU where they took on the hosts and Keuka College.  Tonight the Dolphins will look to get back on the winning track with a win over the Cardinals who are on a two match losing streak of their own.

CSI vs. YORK COLLEGE AT-A-GLANCE
Matchup:  CSI (4-9 overall, 2-4 CUNYAC) vs. York College (5-10 Overall, 3-4 CUNYAC)
Where:  College of Staten Island  –  2800 Victory Blvd, Staten Island, NY
First Serve: 7:30pm
Live Video:  www.csidolphins.com/CSISportsNet
All-Time Series: CSI leads 2-0
Last Year’s Result:   CSI won both 3-0, 3-0
Players To Watch (CSI): Justin Edwardsen and Song Shin Low will spearhead the attack for the Dolphins tonight as they have 75 and 50 kills, respectively.  Edwardsen who is naturally an outside hitter will look to do his damage from the middle of the court as he’s been transitioned to a middle hitter because of his length. Edwardsen will also use his height to meet the Cardinal players and the net and try to redirect the ball so there aren’t any free shots at the Dolphins’ defense.
Players to Watch (YC):  The Cardinals are a threat to score from anywhere on the court as five of their players have 35 or more kills through 15 matches.  Leading the pack is Akeem George with 76 kills on 161 total attacks.  Jonathan Liao has tallied 174 assists, most for the Cardinals, and will find the ball to set his teammates up to hopefully spike it down for a kill on the other side of the court.
News and Notes: This will be the third meeting between these two schools and Staten Island will head into it holding a 2-0 advantage over the Cardinals.  Both teams have played New Jersey City University this year and were swept 3-0 in their meeting.  Staten Island and York both took on Brooklyn College earlier this season and were able to defeat the Bulldogs however it took CSI five sets whereas it took just three for the Cardinals to pick up the win.  York is hitting .171 as a team, good for third in the CUNYAC, while the Dolphins hit just .056 as a team which puts them in eighth.