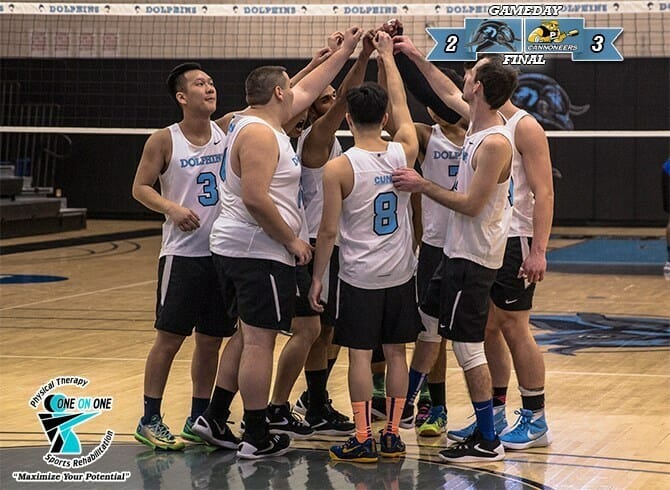 The College of Staten Island men’s volleyball team came into tonight’s game on a three match win streak and felt confident as they took on Pratt Institute on their home court.  The visitors had other ideas as they came in and took the fourth straight win away from the Dolphins in a five set battle.  Pratt won 3-2 (22-25, 25-21, 18-25, 25-15, 15-17) which raised their record to 5-3 overall and the set the Dolphins back to 7-17 overall.

The Dolphins had a hard fought battle which went back-and-forth in the first set.  The Cannoneers were able to stop the Dolphins’ attack towards the end of the set and take control and win 25-22.  Adil El Haddad’s five kills weren’t enough to lift the Dolphins past the Cannoneers.  The Dolphins were without their leading attacker, Justin Edwardsen who was coming off of a career performance. Danil Kukovitskiy, the Dolphins’ leading blocker, was also missing from tonight’s contest due to injury.  Pratt Institute came into tonight’s match coming off of a loss to St. Joseph’s College – Brooklyn, who the Dolphins swept earlier in the year.

The second set the Dolphins finally woke up as they didn’t want to fall behind 0-2 for the second match in a row.  Staten Island would have a large lead midway through the set however they became comfortable with their lead and allowed Pratt back into the game. CSI would quickly recover and squander the Cannoneers’ comeback.  The Dolphins would go ahead and take the second set 25-21 to tie the match up at one.

Pratt caught fire in the third set and went up and never looked back.  The Dolphins hurt themselves in this set and committed seven errors which allowed Pratt to take a lopsided 25-18 win.  The Dolphins would return the favor with a 25-15 win in the fourth set, which saw Khaleeq Baum crush six kills to give his team the win. That win would knot the match up at two and force a fifth set.

The men would lead midway through before Pratt was forced to call a timeout and think of a new plan to stop the Dolphins’ attack.  The Cannoneers devised the perfect plan that saw them go up 15-14 which caused the Dolphins to call a timeout in return to come up with a new plan of attack of their own.  The Dolphins would come out and tie the match up at 15 but the scoring would stop there as Pratt would score a point to take a one point lead which was followed by an attacking error by the Dolphins to close the game out.

Baum would finish the game with a career high 16 kills on 40 attacks while Brandon Lei had a nice game and collected 40 assists in the loss.  Song Shin Low led the way with service aces with five while only committing two service errors.

The Dolphins return to action on Saturday when they will participate in the final CUNYAC multi-match of the year when they travel to York College to take on Lehman College and John Jay College.