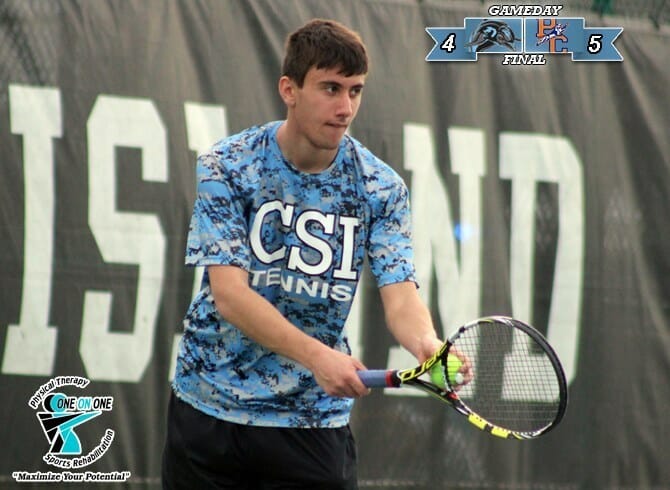 BOXSCORE – In a match that came right down to the final wire, the College of Staten Island men’s tennis team dropped a nail biter to Purchase College in their home and season-opener, 5-4. The Dolphins fell to 0-1 to open the season, while the Panthers improved to 3-2 overall.

Play began with doubles and CSI got off to a nice start, winning two of the three matches. Purchase registered an 8-1 win at the top spot, as the team of Riley Damerell and Joseph Troop scored the win. But CSI got even one spot lower, as the duo of Chris Pinto and newcomer Matthew Vesci were able to score an 8-4 winner over PC’s Danny De La Cruz and Noah Marthaller. Finally, at No. 3, CSI went up by a decisive point when Andrew Adia and Brandon Nickel were able to out-duel Fin Stuart and Brian Doherty by an 8-4 count.

That set the stage for an exciting singles finish. CSI scored straight sets wins at No. 4 with Vesci and at No. 6 with Mitchel Voloshin, but PC countered with a win by Troop at No. 2 and Stuart at No. 5, making the overall score, 4-3, in favor of CSI.

But the Panthers struck back. In the top spot, CSI’s Chris Livoti topped Damerell in the first set, 7-5, but Damerell powered back with a 6-3 win in the second set, and a crisp Damerell then cruised to a 6-2 win in the third set to get Purchase even.

That only left the No. 3 spot up for grabs. There, CSI’s Adia was sharp in a 6-2 winner over De La Cruz in the first set, but the Panther responded with a back-and-forth, 7-5, win in the second set, setting up for a great third set. De La Cruz was in cruise control early, taking a 5-1 lead, but Adia came roaring back, setting up a 6-6 tie, making for a seven-point tiebreak. Unfortunately, for the Dolphins, however, it was De La Cruz that had the final laugh, scoring a 7-4 win in the third set tiebreak to give Purchase the thrilling, 5-4 win.

CSI will be right back in action looking to turn things around tomorrow, when they travel to Purchase College to face City College of New York in their first road contest of the season and in their CUNYAC-opener, at 3pm.