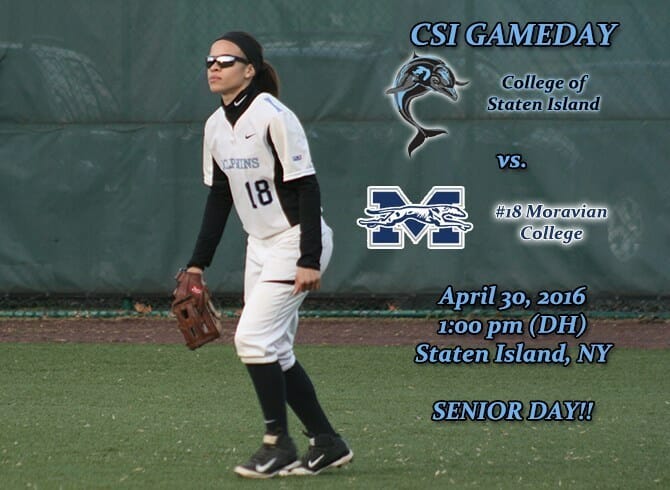 The College of Staten Island softball program is recently coming off of a split against William Paterson University on Thursday.  The Dolphins had a lead for a majority of the first game until it slipped away late and saw them fall 8-6 in eight innings.  CSI wouldn’t let that happen in game two as they were able to secure a 5-3 victory.  Today the Dolphins will take on #18 Moravian College at 1:00 pm at the CSI Softball Complex.  Staten Island will honor their two seniors, Christina Tufano and Chyanne Gilliam, prior to the start of today’s contest.

CSI vs. # 18 MORAVIAN COLLEGE AT-A-GLANCE
Matchup:  CSI (22-10 Overall, 11-1 CUNYAC) vs. # 18 Moravian College (30-4 Overall, 11-1 Landmark)
Where:  CSI Softball Complex – 2800 Victory Blvd, Staten Island, NY
First Pitch: 1:00 pm
Live Video: www.csidolphins.com/csisportsnet
All-Time Series: Moravian leads, 7-0
Last Year’s Result:   Moravian won, 5-0, 7-4
Players To Watch (CSI): Keep an eye out for your seniors Christina Tufano and Chyann Gilliam to make an impact in today’s game.  Tufano has already broken three school records this season and has another one in sight.  Tufano needs just one more triple to tie the school record for most triples in a career which currently sits at 19. Tufano is also batting a hefty .416 on the year, with 34 RBIs and two home runs. Gilliam is batting .351 on the year and has 27 RBIs with a single home run.  Gilliam has played an outstanding season in right field as she has just one error to her name which came in the beginning of the year.  Since then Gilliam has made some highlight diving catches in the outfield to help keep opposing teams from scoring runs.
Players to Watch (MC):  Julie Siragusa is leading the Greyhounds this season with a .406 batting average. Siragusa also has 23 RBIs and two home and 20 doubles throughout the season.  Kat Spilman will be the player the Dolphins have to keep their eye on as she has amassed seven home runs this season while batting .385 and collecting 29 RBIs.  In the circle the Greyhounds have been absolutely dominant. Both Amanda Carison and Josie Novak have sub 2.00 ERAs through 34 games this season.  Carison has the better of the two with a 1.71 ERA with 94 strikeouts and a 14-2 record.  Novak is 16-2 this season and has 144 strikeouts with a 1.90 ERA.
News and Notes: The Greyhounds are 16-2 when playing away from home this season which matches the same record the Dolphins have when playing at the CSI Softball Complex.  The Greyhounds have outscored the Dolphins 64-12 in this series that dates back to the 2011 season in which the Dolphins lost 5-8. Staten Island is ranked 22nd in the nation in doubles per game with two per game, and 7th in the nation in triples per game.  Moravian College is ranked 32nd in the nation with a .346 batting average, and 9th in the nation in fielding percentage.  Josie Novak is 18th in the nation with 144 strikeouts on the year while her teammate Carisone is 26th with five shutouts.  Jacqueline Cautela has tied the single season record with 17 doubles and will look to take that record for her own in today’s doubleheader. 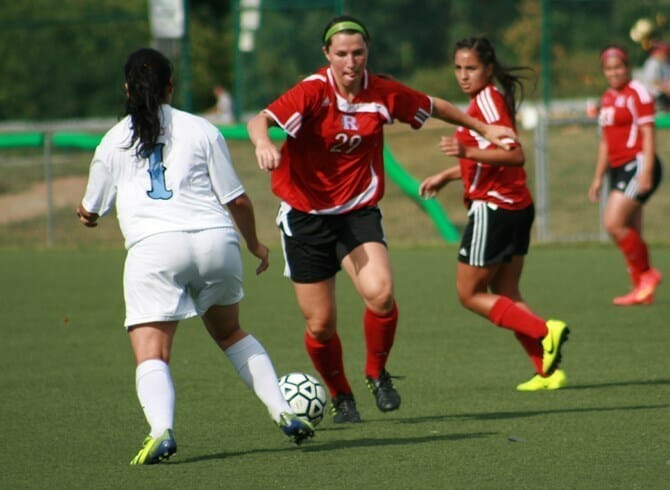