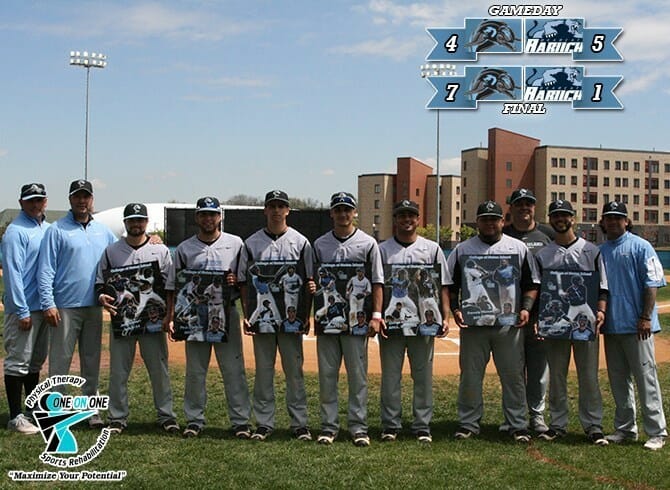 The College of Staten Island baseball squad needed a split against Baruch College on Senior Day to take home the 2016 CUNYAC Regular Season Championship, and that’s exactly what they got at the CSI Baseball Complex on a day where they were the visiting team on their home field.  Baruch won the opener, 5-4, setting up a winner-take-all scenario for the regular season title.  The second game the Dolphins delivered by way of a 7-1 victory to secure the crown and the No. 1 seed in the upcoming CUNYAC Tournament which kicks off on Thursday.

Errors were a big story for both teams on the day as three errors by the Dolphins gave way to three unearned Baruch runs in what was a tight contest.  The Bearcats would then commit five errors in game two that helped CSI roll to the victory in that final.  In the opener, the Bearcats grabbed a second-inning lead when a CSI infield error plated Dan Daley who had doubled earlier in the inning.  CSI struck right back in the third frame when a Palmeri single stroked in two runs with the bases loaded, making it a 2-1 game.

After CSI starter Tom Musson got through the third, he fell into trouble in the fourth, helped along by two Dolphins errors that prolonged the inning.  The first two runs came in via error, while Jasdeep Buttar’s two-RBI double made it a 5-2 game.  Musso would regroup to end the inning, but his day was done after the fourth frame.

From there, CSI tried to chip away and were nearly successful.  They got to starter Matthew Fazio again in the fifth inning, when Frank Sconzo earned on via walk and was promptly plated by yet another Palmeri double.  The Dolphins, however, went quietly from there and went in order in the sixth before a feverish seventh inning.

With two outs, a walk and a Delprete single put runners on base, and then a fielder’s choice error off of Palmeri’s bat brought in a run.  CSI then had runners at first and second, but Fazio forced a Frank Smith pop out to end the threat, and the game, 5-4.

CSI out-hit Baruch, 6-4, as Palmeri and Delprete each had two hits.  Fazio went the distance in the win, fanning five.

In the second game, it was once again Baruch that got on the scoreboard first, plating a run off of CSI starter Christian Capellan as Luca Altamirano scored with the bases loaded and CSI turning a double play.  It took CSI until the third inning, but they were able to counter off of BC starter Ryan Smith.  Frank Smith smacked a double that chased Anthony Dimarco and Palmeri, and Smith would later jet in on a Baruch error off of the bat of Glenn Glennerster.

With Capellan motoring along for CSI, the Dolphins added a digit in the fifth inning on a Glennerster sac fly that chased in Palmeri who opened things up earlier in the frame with a single.  The Dolphins then broke things wide open with a three run seventh inning off of reliever Ryan Warner.  Thanks to a single and two errors, CSI loaded the bases and later George Kantzian ripped a two RBI single up the middle.  Yet another Baruch error loaded the bases again and Ciprello would add a sac fly making it a 7-1 game.

Capellan was given the ball in the bottom of the frame to try and wrap things up and despite allowing two base runners, he wiggled out of danger and recorded the complete game victory, allowing just eight hits, fanning five, CSI out-hit Baruch, 9-8, with Smith and Dimarco adding two hits apiece.  Michael McGroarty posted two hits for the Bearcats.

The win means the Dolphins, the defending CUNYAC Champs, will earn the No. 1 seed for the upcoming CUNYAC Tournament which takes place on Thursday, May 5.  CSI will play at 7pm that evening at home against a #4 vs. #5 seed single elimination contest which will take place immediately before their game, at 4pm.  Baruch has clinched the No. 2 seed in tournament, with the remaining field still yet to be determined.