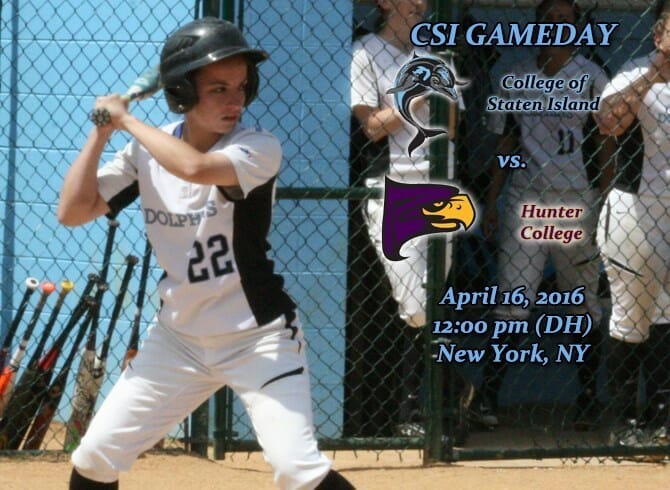 The College of Staten Island softball team will play their first consecutive games without a cancellation for the first time since March 8. The Dolphins will take to the road today to play against CUNYAC rivals, Hunter College at 12:00 pm in a doubleheader. The last time the Dolphins took on Hunter College was on May 2, 2015 in the CUNYAC Championship where the Dolphins went on to win 8-1.

CSI vs. HUNTER COLLEGE AT-A-GLANCE
Matchup:  CSI (11-5 Overall, 4-0 CUNYAC) vs. Hunter College (8-10 Overall, 6-0 CUNYAC)
Where:  Randall’s Island Field #15 – 20 Randall’s Island Park, New York, NY
First Pitch: 12:00 pm
All-Time Series: CSI leads 46-33
Last Year’s Result:   CSI won two of three, 5-7, 7-1, 8-1
Players To Watch (CSI): Nicole Meliak was crucial in the games against New Jersey City University on Thursday after she led her team to a pair of wins with four RBIs.  Meliak has been hitting well the past four games and is hitting .500 over that stretch. Christina Tufano has increased her batting average every game during this eight game win streak and is now batting .412 on the year, good for second on the team.
Players to Watch (HC):  Taylor Crofts leads the Hawks with a .400 batting average this year and is first on the team with 24 hits.  Crofts gets on base more than any other Hawk with a .486 on base percentage. Emily Ruiz cleans up the bases for Hunter College and leads her team with 15 RBIs and a .596 slugging percentage.
News and Notes: The Dolphins have struggled when playing at Hunter College in years past as they have an 11-14 on the road.  However, as of recently the Dolphins have held a 5-1 edge over the Hawks when playing at Hunters home field.  Over the last 10 meetings between these two CUNYAC powerhouses the Dolphins have won 9 of those meetings and have outscored Hunter 77-25. The Dolphins has had the best of the CUNYAC over the past three years winning the Championship three times in a row and advancing to the NCAA Regional Round.