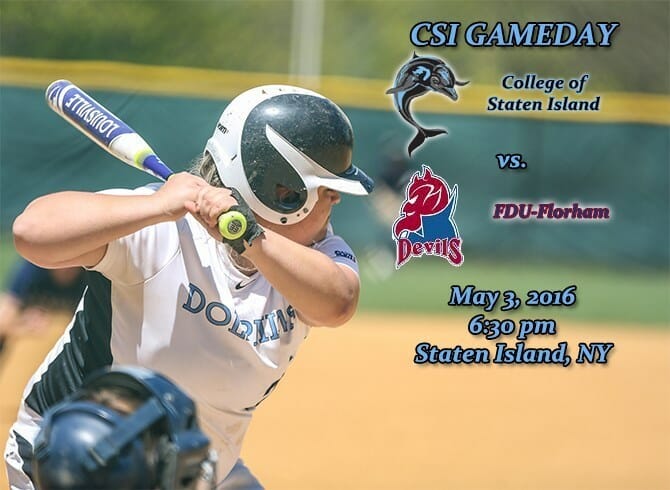 The College of Staten Island softball team is coming off a pair of losses to #18 Moravian College over the weekend which dropped the Dolphins down to 22-12 overall.  Today’s single softball game will see the Dolphins take on the Devils of FDU-Florham at 6:30 pm at the CSI Softball Complex for the final home game of the season before the CUNYAC Playoffs begin on Friday, May 6.

CSI vs. FDU-FLORHAM AT-A-GLANCE
Matchup:  CSI (22-12 Overall, 11-1 CUNYAC) vs. FDU-Florham (17-13 Overall, 9-5 MAC Freedom)
Where:  CSI Softball Complex – 2800 Victory Blvd, Staten Island, NY
First Pitch: 6:30 pm
Live Video: www.csidolphins.com/csisportsnet
All-Time Series: FDU leads 11-5
Last Year’s Result: CSI won both, 5-3, 11-10
Players To Watch (CSI):  Vanessa Joia has been solid for the Dolphins in the second half of the season, batting .382, good for third on the team while collecting 14 RBIs, and smashing three triples.  Joia is a staple for the Dolphins behind the plate and continues to shine in big moments when her number is called upon to make a clutch play.  Jacqueline Cautela continues to be hard to strikeout as she has defended the plate and only struck out four times through 110 at bats.  Cautela is still searching for the last triple that will give her the record for most triples in a single season as she is currently tied for first with 17.
Players to Watch (FDU):  Nikki Caruso has been putting up astronomical numbers this season and is batting .521 which puts her 10th in the nation in batting average. Caruso has also put 9 balls over the wall and leads the Devils in RBIs with 37 as well as slugging percentage with .915.  Trailing not far behind is her teammate Wynne McCann who is 11th in the nation with a .517 batting average.  McCann has tallied 35 RBIs and eight home runs this season and has only struck out four times.
News and Notes: The Devils haven’t traveled well this season and are 8-12 when they play away from their home stadium.  The Dolphins have been extremely hard to beat at the CSI Softball Complex this season and boasts a 16-4 overall record.  When it comes to non-conference games at home the Dolphins are 8-4 compared to their 8-0 record at home when playing CUNYAC games.  As a team the Devils are batting .368 which places them 12th in the nation as a team while the Dolphins are just on the outside of the top 50 with a .330 average.  The Devils have their fielding issues however and have amassed 46 errors so far this season compared to just 38 for the Dolphins.