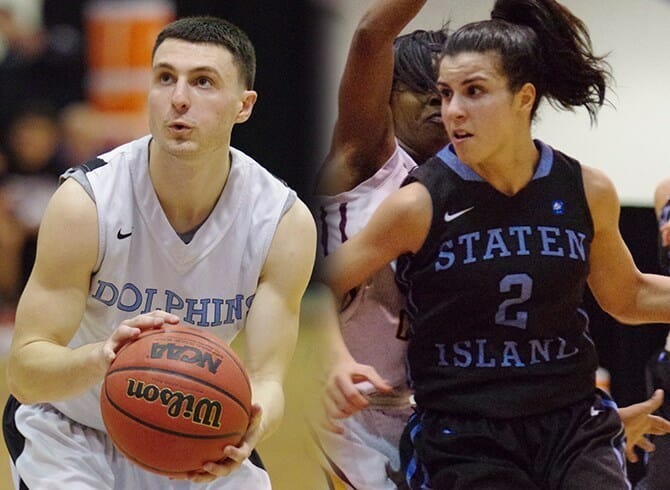 In early-November, just days prior to the College of Staten Island men’s basketball opener, senior Frank Schettino had the words “CUNYAC Champions” transcribed onto his new Nike sneakers, one white pair and one black pair that he would wear to every home and away basketball game the Dolphins would play in this season.  A bold move considering the Moore Catholic High School star had never won the big game before.  In a locker room just feet away, junior guard Christina Pasaturo was getting ready to make the transition from the team’s point guard to her natural shooting guard position, a heavy load considering the team had lost two senior components from a year ago at guard, and it’s CUNYAC Rookie of the Year on the inside.

Thus began the story of two of the most dynamic seasons in CSI basketball history by a basketball pair, one that ends in the school’s first double conference championship in over three decades and the institutions first double trip to the NCAA National Championship Tournament that begins tomorrow night on out-of-state floors.

“Coming in to the season we knew we would have our challenges, but we never thought about rebuilding,” said Schettino, the only four-year player on a team that graduated two-time Player of the Year Will Fonseca during the off-season.  “We just bought in to the system our coaches put in front of us and banded together.”

Still, buying in is one thing.  It’s another to put the wheels in motion, and Schettino admits, it was a struggle.  “Right out of the gate we played a couple of Top 25 teams and we struggled at times.  We just needed more time to come together,” Schettino said.  Indeed the Dolphins dropped a pair of games against Salisbury University and Cabrini College, and after a home win, lost another on the road to New Jersey City by a huge margin.  It was a wake-up call for the senior.

“We knew we were better than how we played.  Those games made us work harder and harder in practice.  We started to get in sync and develop more.  Now this team loves one another and we practice and play hard for each other and good things have been happening,” he said.

Pasaturo was feeling those same struggles.  A natural shooter, Pasaturo let them fly early, but after four games the team was sitting at a mediocre 2-2, and CSI’s sharpshooter was hitting on less than 30% from the floor and a chilly 21% from three-point range, normally her strength.  Admittedly, if was a source of frustration for the former CUNYAC Rookie of the Year.  “I was in the gym all summer putting up shots, every week during the early season putting up thousands of shots and, I don’t know, I think honestly players just go through slumps and I hit one,” she explained.  “What’s important is my team kept getting behind me and my coaches kept letting me shoot and find my shot and it started to come together.  Sometimes all it takes is one game to get back on track.”

That one game for Pasaturo came on December 3 against York College.  Pasaturo was 6-7 from the arc en-route to 27 points in just 16 minutes played in a 79-40 win on the road.  That same afternoon, Schettino and the men’s team held York to just 50 points after surrendering 103 two days earlier to Stevens Tech.

The duo never looked back.

Pasaturo set in motion a string of 21-straight games scoring 20 points.  By midseason, Pasaturo was starting to become an NCAA Division III torch-bearer for three-point shooting, posting four double-doubles as well.  The eye-popping numbers and five CUNYAC Player of the Week honors were based on CSI’s call for pressure defense, which the guard contends leads to better transition buckets the other way.  “Really, my teammates are way better defenders than I am,” she said with a laugh.  “But that fuels everything that we do.  It makes it easier to get fast-break layups and find open spaces against defenses.  The personal accolades are nice, but to see us succeed as a team is the most rewarding.”

For Pasaturo the explosion in her numbers is evident.  She became the only player in CSI women’s basketball history to record 500 points in back-to-back seasons and with 16 points in the CUNYAC Championship nearly a week ago, she became CSI’s all-time single-season point scoring leader with 611 points, standing three three-pointers away from that record as well.  Still, Pasaturo doesn’t flinch when talking about the record-breaking success.  “It would have meant absolutely nothing without winning that Championship,” she explained.  “That has been our goal from day one and I it just feels great to share that with my teammates.”

Schettino concurs.  As CSI began to gel, so too did the senior’s penchant for finding the open man and connecting on his own baskets as his teammates garnered more and more attention.  After the win against York, Schettino tied a school record with 14 assists against CCNY.  A month later, to start 2017, he broke the record with an 18-point, 12-rebound, 17-assist performance against Medgar Evers, the first of an unprecedented five triple-doubles this season.  No NCAA Division III player has more than one.  “The numbers are just a part of the normal motions of the game,” he said.  “I’m going to try and do anything I need to do to help our team win the game.  Whatever it is, I try and tell myself to just get it done.”

Schettino currently leads the nation in total assists with a CSI record 235 this season.  He is also tops on the team in scoring and tied his own school-record with 43 in a single game this season against CCNY, and set the school career record for steals as well.  It’s been part of a monster statistical season for Schettino, who still hasn’t fully put into perspective the damage he has done to the record books at CSI.

“It’s unbelievable, my name tied to those records,” he said.  “As a freshman I never would have believed it.  Now, I’m getting set to graduate…I still just haven’t wrapped my head around it.”

“We believed in ourselves all year and to be able to play in this tournament is going to be a great experience,” said Pasaturo.  “We don’t mind being the underdog.  We know if we play our game and run our style of basketball we will be just fine and with nobody graduating this year, we know that we still have our best basketball to play.”

Unlike Pasaturo, Schettino’s days of playing basketball at CSI are numbered.  He looks at his basketball sneakers and can’t help but smile.  “Some people told me it’s like a movie script how it played out.  But, you know, it was something I did to remind myself and my teammates of what we wanted to accomplish, and we put it out there for everyone to see so that we couldn’t hide from it and it would be that extra push for us.”

Schettino is choosing to stay guarded, opting not to put NCAA Champions on his sneakers going into the national tournament this weekend, but it won’t stop him from setting high goals this week.  “We’re super confident with what we can do.  We know no matter who we play, it’s the same game, same hoops, and the same ball.  No matter who we play we can make some noise in this tournament.”

The road to the championship will begin for both teams on Friday evening.  The women travel to No. 10 Christopher Newport University for a 7:30pm tip-off, while the men travel to No. 25 Swarthmore College for an 8pm affair.  For Schettino and Pasaturo specifically, they will be looking to keep a magical season for themselves and their respective units intact.