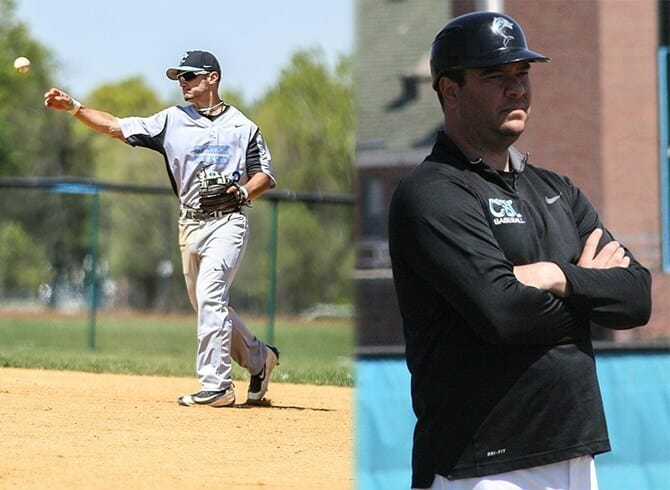 The College of Staten Island baseball squad celebrated another CUNYAC Championship this season with a 13-5 victory over Baruch College. For the baseball team it was Nick Delprete taking home Player of the Year honors while Coach Michael Mauro picked up his seventh Coach of the Year award.  The Dolphins also scattered seven players in the CUNYAC first and second team all-star list.  George Kantzian, Glenn Glennerster, Christian Capellan, and Tom Musso were all first team selections while Joe Palmeri, Frank Sconzo and Phil Ciprello were named to the second team.

Delprete had an outstanding senior season, leading the Dolphins with a .379 average (50-132).  Delprete had a solid outing in the field for the Dolphins and played in 29-straight games without committing an error.  He finished his senior season with 33 runs, seven doubles, one triple in 36 games played with 35 starts. Additionally, he only struck out eight times and had eight stolen bases on 11 attempts and three sacrifice flies.

At second base, Delprete was nearly an unbreakable wall, as he committed just three errors all year, which all came in one game while fielding perfect games in CUNYAC play.  He tallied 79 put outs on the year with a .983 fielding percentage while collecting 94 assists.

Delprete, the team leader in batting average, posted career highs in average, and on-base percentage, while registering a career low in errors with just three.

Coach Mauro, this is his seventh CUNYAC Coach of the Year crown.  The Dolphins won the CUNYAC Regular Season Championship with a 7-1 overall mark, splitting the final series of the season with Baruch and earning the No. 1 seed in the CUNYAC tournament.

George Kantzian finished his CSI career with his finest season to date, setting career highs in every offensive category.  Kantzian tied the single season record for doubles with 19 while placing fifth on the team with a .317 batting average. He followed that with 38 hits on 120 at bats, scoring 19 runs and leading the Dolphins with two home runs.  Kantzian tallied 27 RBIs, good for third on the team while going a perfect 8-for-8 on stolen bases.  Kantzian also made a positional change this year, going from a catcher to first baseman where he shined and only committed five errors.

Glenn Glennerster, last year’s CUNYAC Rookie of the Year, had yet another stand out season.  Glennerster gave the Dolphins a big hit when needed, time and time again all season including a two RBI single to left center to swing the momentum in the Dolphins’ favor against Baruch College in the CUNYAC Semifinal round.  Glennerster batted .336 on the year with two doubles and 26 RBIs.  He was 8-for-9 in stolen bases and committed just one error on the year.

Christian Capellan was a welcomed face back to the Dolphins mound this year after missing much of his rookie season with an injury. Capellan would finish the season with a 3.82 ERA, good for second on the team while collecting a 5-1 record through 13 appearances with eight starts.  He also struck out 43 batters and allowed two home runs on the year.

Tom Musso another pitcher that was named to the first team for the Dolphins had the best ERA on the squad with 3.11.  Musso went 5-4 overall through 12 appearances and 10 starts and had 55 strikeouts through 55 innings pitched.

Palmeri had a monster season at the plate and collected 41 RBIs, a team high, while batting .366 and scoring 42 runs, also a team high.  In his senior season he broke the CSI record for assists and had a .887 fielding percentage from the shortstop position.  Frank Sconzo started every single game for the Dolphins at catcher and moved up to the No. 1 batting position midway through the season as his ability to reach base was unmatched by any other Dolphins as he led the way with a .461 on base percentage. He batted .294 on the year and was walked an outrageous 30 times through 102 at bats which puts him in 6th place all-time at CSI.  Phil Ciprello batted .267 on the year and drove home 16 runs while scoring 13 of his own.