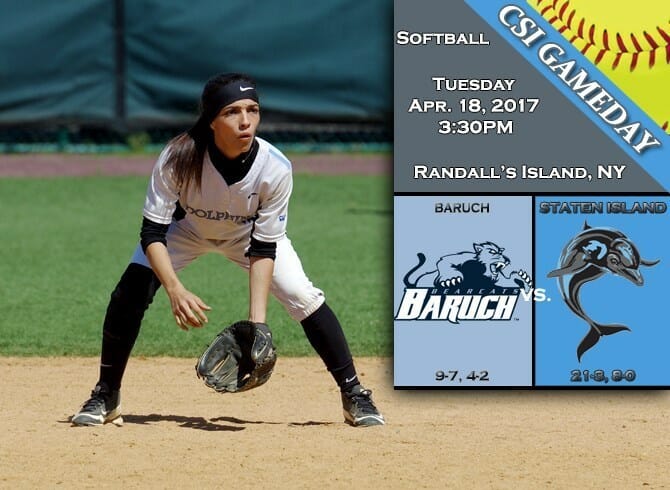 The CSI Softball team will travel to Randall’s Island for a doubleheader against conference opponent Baruch College starting at 3:30 pm. The Dolphins are undefeated in CUNY play, while the Bearcats sit third behind Hunter College.

CSI vs BARUCH COLLEGE AT-A-GLANCE
Matchup: CSI (21-3 overall, 8-0 CUNYAC) vs. Baruch College (9-7 overall, 4-2 CUNYAC)
Where: Randall’s Island #15 – New York, NY
First Pitch: 3:30 pm
All-Time Series:  CSI leads 40-7
Players To Watch (CSI): CUNYAC Rookie of the Week, Patricia Riches, has become the Dolphins top player as she racks in a .562 batting average with three homeruns, 25 RBIs, seven doubles, and three triples. Riches is among the national leaders in hitting as she notched four RBIs and seven runs in the week. Star CUNYAC Pitcher of the Week, Jacqueline Cautela, remains undefeated in the circle (10-0) with a 0.22 ERA in 65 IP with 48 strikeouts and 13 walks. Cautela is also another heavy hitter for the Dolphins, as she sits behind Riches with a .429 batting average, with 32 runs, seven doubles, two homeruns, and 20 RBIs. Vanessa Jioia is third on the team with .381 batting average, with 12 runs, four doubles, a homerun, and 15 RBI.
Players To Watch (BC): The Bearcats have five players above a .400 batting average: Olivia Dellston (.490), Nicole Bellini (.471), Katherine DelRosario (.447), Christina Chin (.431) and Cassandra Lagana (.404). Dellston is the team leader with 25 hits and RBI, while Chin is first with 24 runs. Chin and Dellston are both tied for first with one homerun. Pitcher Lagana has a 5.07 ERA in 58 IP with 34 strikeouts and 31 walks.
News & Notes: The Dolphins have created a new CSI All-Time Record in Longest Winning Streak. The Dolphins have topped their 1990 record of 16 straight wins with their 17th straight win of the 2017 season, after a doubleheader sweep against Hunter College. Staten Island’s last loss to Baruch was in 2013, as the Bearcats pulled away with a 3-2 win. Since then, the Dolphins are on a seven-game win streak over Baruch. Both teams nationally ranked with their team batting average, but Baruch is 4th with a .380 average, while the Dolphins are 14th with a .357.