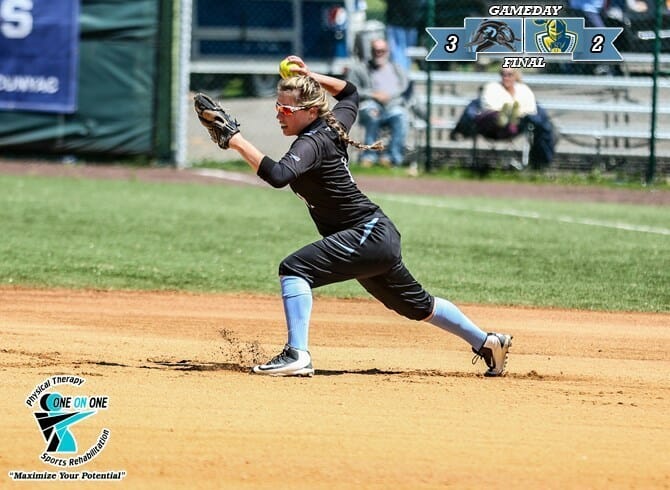 CSI earned the win by way of three runs in the bottom of the sixth inning, after falling behind 2-0, in the fourth inning.  In an almost carbon copy of their game yesterday, CSI made noise early, but left the bases loaded in the first inning, and then were frustrated most of the rest of the way at the plate until that noisy sixth inning.

After Dolphins starter Jacqueline Cautela got through the Knights in order in the first, she earned on via a double to lead off CSI’s turn of the first, then advanced to third on an Antoinette Galbo bunt single.   After an out, Vanessa Joia walked to load the bases, but then Neumann starter Haley Broomell got Kristy Colangelo to pop out and Chyanne Gilliam to, strike out to end the frame.

CSI would not get another base runner, while Neumann then assumed the lead with a big fourth inning.  Becky Giunto started it off with a single and Jamie Cox followed with another.  Jackie Schneider followed, and belted a two-run double to give the Knights the edge.  Cautela left Schneider stranded from there but the damage was done.

The Dolphins got a runner on base in each of the next two innings, but again, the Dolphins could not muster the timely hit when they needed it.  That is, until the sixth inning.  Down to their final six outs, CSI’s Christina Tufano started the inning with a double, and Joia would follow with an infield single that moved Tufano to third base.  Colangelo was up next, and she dribbled a grounder to shortstop as well, and a fielding hesitation saw her reach base and Tufano scored, making it a 2-1 game.  Gilliam then flied out, but Joia moved to third.  Broomell then forced a harmless pop-out to register the second out, but CSI answered by sending Notaro to the plate, and she redirected one right back at Broomell that could not be fielded in time to prevent the run, knotting the score at 2-2.  Colangelo advanced to third on the play, and next batter Nicolette Trapani wasted no time attacking the first pitch and smoking a ball to left field to score in what would be the game-winner.

Cautela popped up to end the inning, but she would take the circle and leave little to doubt, looking overpowering while retiring the Knights in order to preserve the come-from-behind victory.

CSI out-hit NU, 8-5, with Joia and Notaro each posted a pair of hits for the Dolphins.  Cautela allowed five hits in the complete game win, fanning seven.

The win pits CSI against Manhattanville.  The Valiants were also the victims of a loss in come-from-behind fashion.  After assuming a 3-1 lead, the Lions tied the game at 4-4 and won in walk-off fashion.  TCNJ punched their ticket directly to the Championship Final at 12 Noon tomorrow and will await the winner of CSI-Manhattanville.