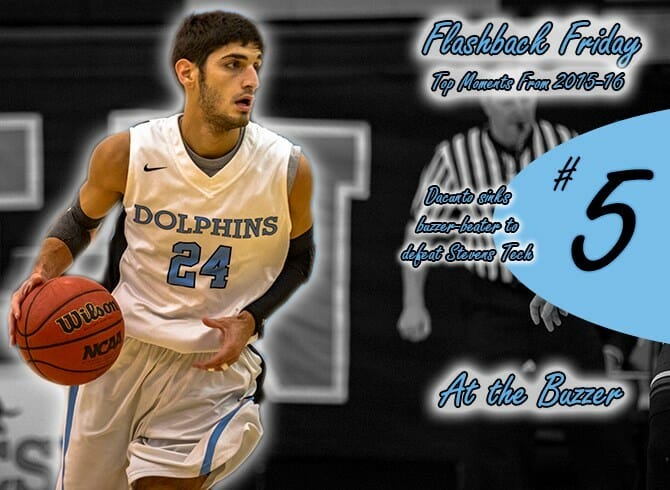 Flashback Friday looks at the top moments from the 2015-16 athletic year at the College of Staten Island.  We’ve reached the midway point and at No. 5 is the thrilling men’s basketball win over Stevens Tech in December of 2015.  The Dolphins toppled the Ducks, 97-95, in their home opener thanks to a three-pointer by junior Vincent Dacunto as time expired.

#5 – Dacunto buzzer-beater lifts Men’s Basketball over Stevens Tech in home opener
Date:  December 5, 2015
Who:  Men’s Basketball
Where: Sports & Recreation Center – Staten Island, NY
What Happened:  After five-straight road games to open the season, the Dolphins were anxiously looking forward to their home opener.  Waiting for them were the Ducks of Stevens Tech, who entered the game ranked 14th nationally in scoring offense and first overall in total assists.  The Dolphins had never beaten Stevens on their home floor during regular season play, and were without leading scorer Frank Schettino due to injury, adding to the surrounding drama.  Still, CSI proved up to the task, shooting a red-hot 56% from the floor in the game’s first half to take a five-point lead at intermission.  The lead swelled to 13 points with just over 10 minutes to play before the visiting Ducks launched a feverish comeback to take their first lead with under two minutes to play in regulation.  All seemed lost when a Patrick Barron three was followed by an Alex Lorenz layup with just 56 ticks remaining to put Stevens up 95-91.  CSI, however, had other plans, and after a missed three, sophomore Edin Bracic collected a huge offensive rebound and followed with a three and after forcing a three-point miss that would have ended the game the other way, Bracic collected another board, dished to Wesley Smith, who found an open Dacunto on the sideline.  The junior was in place to heave up a three-pointer from in front of his own bench and as the red lights ignited, the ball calmly drained through the hoop, sending the team into hysterics and burying Dacunto under a sea of white jerseys.  It was the first of a season-long five game win streak for the Dolphins, who would finish the season 18-8. Q&A…with Vincent Dacunto
Coming into that game against Stevens Tech you had played the first five games on the road, which included a game against NCAA D1 Wagner College.  How excited were you to finally be playing on your home floor against Stevens Tech?   I was very excited.  It’s always great playing at home in front of your family and friends.  I love to build off of the energy of the fans, we are fortunate enough to have great fans.

You had a big role at that stage of the season with the injury to Frank.  Did that put any extra pressure or weight on you going in?  Did you approach that game or that stage of the season differently due to his injury?   It definitely did put more pressure on me to step up for my team since we did not have Frank playing. I approached that game the same way I approach every game and that is to do whatever means necessary to win the game.

Coming into that game, Stevens Tech was one of the highest scoring teams in the nation, so many people thought it could be a shootout.  Did the team anticipate having to trade baskets all night with that top-shooting team?  Well for us, Coach (Petosa) stresses defense, so we did not want it to be a shootout but we were aware of how many points a game they scored. The goal usually is to hold teams under their averages, but we found a way to win.

Of all the starters, only Tom Delahanty took less shots from the floor than you did that night (but he was also in foul trouble and didn’t play much), and you tend to be very selective with your shots in general.  Is that part of your game?  To me it doesn’t matter how many shots I get up or how many points I score. The main goal for me is to win basketball games and do whatever my team needs in order for us to win.

You guys were winning the whole way and were up by 13 in the 2nd half until they made a comeback and took over the lead with under two minutes to play.  As a player in that scenario, what’s going through your mind there?  I was not too happy with that at the time as we blew a double digit lead in the second half. As a player in that scenario you can’t panic and have to continue playing and stick with the game plan. Although I was disappointed, I know that basketball is a game of runs and it was our turn to make our run after they took the lead.

You fell behind by four with under a minute left and Edin hit a three and then they missed a three that would have ended it.  Take us through that final series.  At what point did you know you were going to take the shot?  Were you confident it was going in?  What was your reaction when you saw it go in?  To me, I think Edin’s shot and rebound were bigger plays than my shot. The final series we took a gamble by not fouling and going back to trusting our defense to get a stop.  When I saw Edin grab the rebound I immediately ran the floor in our 5-on-0 fast break lanes, something we work on in practice all of the time.  The next pass went to Wes and I thought he was going to shoot it, but it all happened so fast I really couldn’t believe it when it went in. Probably one the greatest moments in my life when the whole team dog-piled on top of me after we won.

Basketball players can go their whole lives without a moment like that.  How satisfying was it to experience and where does it sit with you as a top highlight in your career?  In sports it surely sits on top as the most satisfying moment of my career. The goal now is to win a CUNY Championship this year coming up.