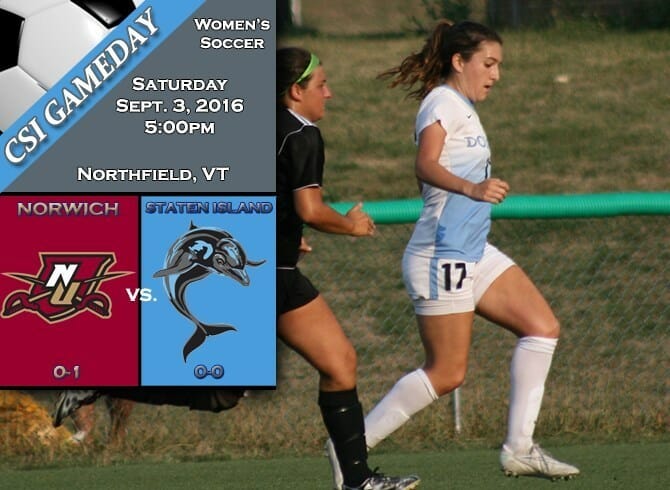 The College of Staten Island women’s soccer squad will begin defense of its championship season this evening, travelling to Northfield, Vermont, to take on Norwich University in the first of a two-day set at 5:00pm.  The Dolphins will take on the host Norwich team that is playing in its second game in three days.  It will be the first-ever meeting in their history.

CSI vs. NORWICH UNIVERSITY AT-A-GLANCE
Matchup:  College of Staten Island (0-0 Overall, 0-0 CUNYAC) vs. Norwich University (0-1 Overall, 0-0 LEC)
Where:  Sabine Field – 185 Harmon Drive, Northfield, VT
Kick-Off: 5:00 pm
Live Video:  http://www.nsnsports.net/colleges/norwich
Live Statistics: http://norwichathletics.com/sports/wsoc/2016-17/boxscores/20160903_4vs8.xml
Players to Watch (CSI): The Dolphins had a high roster turnover from a year ago, but still have plenty of returning anchors that will lead the squad.  Seniors Jennifer Cosenza and Senda Karagozler were fixtures in the midfield and plan to stay that way, while defending midfielder Kaitlin Russo is a strong presence in the back.  The Dolphins also welcome back six sophomores, among them CUNYAC Rookie of the Year Lauren Smith and defender Adriana Parello who was sidelined all of last year due to injury.
Players to Watch (NU):  Senior trio Meghan McMullen, Holly Lutz and Morgan Ziegler join junior captain Ashley Carvalho as key fixtures of the unit and all should see plenty of minutes this weekend.  Junior goalkeeper Leandra Flores-Nieves made a whopping 20 saves in NU’s season opener, a tough, 1-0, loss to Colby-Sawyer in double overtime on Thursday evening.
News and Notes: This is the first meeting ever between the two teams in their respective histories.  The CSI women finished 13-5-1 a year ago, Head Coach Giuseppe Pennetti’s first with the team.  The Dolphins feature a team with 13 new faces.  The program is 5-7 all-time in season openers, but have five of the last six of their season-opening games since 2010.  The Cadets finished 3-12-1 last season, but posted a respectable 2-3 mark against out-of-conference opponents.  CSI will turn around and play again tomorrow at 2:00pm against Johnson State College.  Norwich will also play JSC on Monday, at 5:30pm.