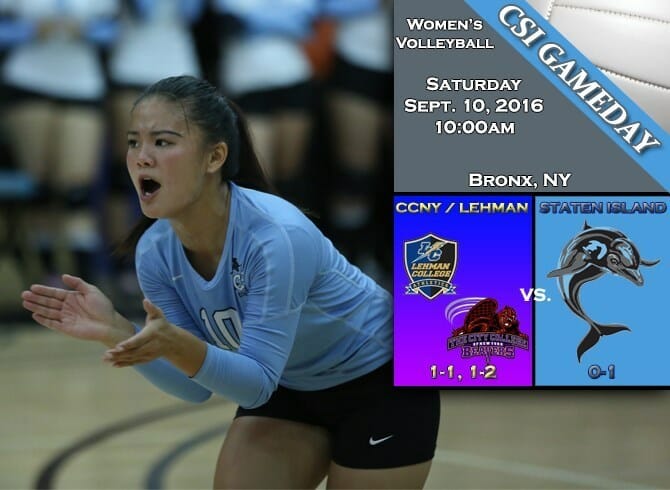 The College of Staten Island women’s volleyball team will take to the road for the first time this season where they will head to Lehman College to participate in a CUNYAC tri-match.  CSI will take on City College of New York in the first game of the morning while taking on Lehman in their second match of the day.

CSI vs. CCNY / LEHMAN COLLEGE AT-A-GLANCE
Matchup:  College of Staten Island (0-1 Overall, 0-0 CUNYAC) vs. CCNY (1-1 Overall, 0-0 CUNYAC) / Lehman College (1-2, 0-0 CUNYAC)
Where:  Lehman College- 250 Bedford Park West, Bronx, NY
First Serve: 10:00 am
Live Video:  http://lehmanathletics.com/watch/?Live=137
All-Time Series:  CCNY leads 13-2, Lehman leads 18-2
Last Year’s Result:  CSI won 3-0, Lehman won both, 3-1, 3-0
Players to Watch (CSI): Siobhan Granich and Vanessa Reyes will lead the attack for the Dolphins as they will be the point collectors this season.  Senior Victoria Wong will be tasked with defending their side of the court and to keep the ball off the floor as much as possible as she continues to add to her dig tally.
Players to Watch (LC): Salveira Gonzalez currently led the Lightning with 12 kills this season.  She is a tall opposite hitter that the Dolphins will have to keep an eye on if they play to win this afternoon’s game.  Setting Gonzalez up for success is Samantha Delgado who has already collected 29 assists in this young season.
News and Notes: After losing 13 straight matches to CCNY since 2001, the Dolphins have started to turn this rivalry around.  CSI has won the last two meetings and has only dropped one set which came at a neutral site in 2014. Lehman has owned this series and has won the last 13 meetings and have only dropped eight sets. CSI will look to win its first two opening CUNYAC games since the 2007 season where they defeated York and Lehman College.