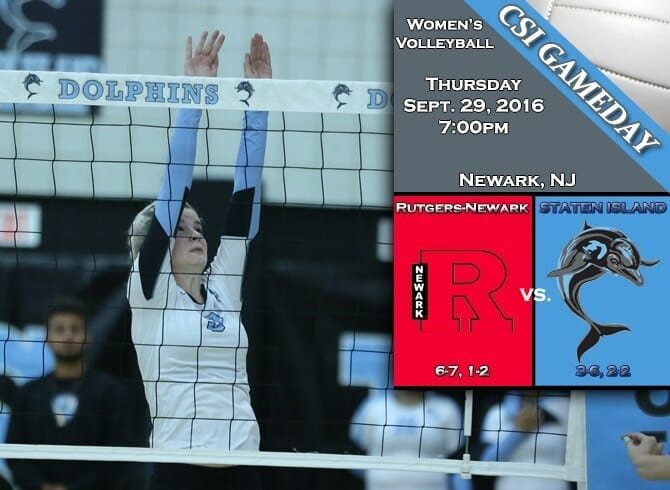 The College of Staten Island women’s volleyball squad returns to the court tonight looking to string together a pair of wins as they will travel to Rutgers-Newark to take on the Scarlet Raiders in a non-conference match in Newark, NJ.  First serve is scheduled for a 7pm start. Tonight’s game is also Jason Madsen’s homecoming as just last season he was the head coach of the Raiders’ women’s volleyball squad.

CSI vs. RUTGERS-NEWARK UNIVERSITY AT-A-GLANCE
Matchup:  College of Staten Island (3-6 Overall, 2-2 CUNYAC) vs. Rutgers-Newark (6-7 Overall, 1-2 NJAC)
Where:  Golden Dome – 42 Warren St, Newark, NJ
First Serve: 7:00pm
All-Time Series:  Rutgers-Newark leads 5-1
Last Year’s Result:  DNP
Players to Watch (CSI): Senior Libero Victoria Wong recently won CUNYAC Libero of the Week for her performance against St. Joseph’s College – Brooklyn.  The award is her first of the year as well as the first for the women’s volleyball team this season. Both Vanessa Reyes and Siobhan Granich have collected 55 kills this season and have a .079 and .055 hitting percentage, respectively.
Players to Watch (RU-N):  Karolina Kopacz leads the Raiders with 119 kills on the year and a .222 hitting percentage.  Kopacz also shares the ball as she is the team leader in assists as well with 171. The Dolphins will have to get the ball past Rebecca Ford as she has collected 28 blocks through 13 matches this season.
News and Notes: The Dolphins have not defeated the Scarlet Raiders since a 3-2 win back in the 2009 season.  Since then, the Dolphins have lost four straight matches and have taken just two sets from Rutgers.  The good news for the Dolphins is that their lone win came at the Golden Dome. CSI will look to make it a good homecoming for Coach Madsen as they will look to defeat his former squad.