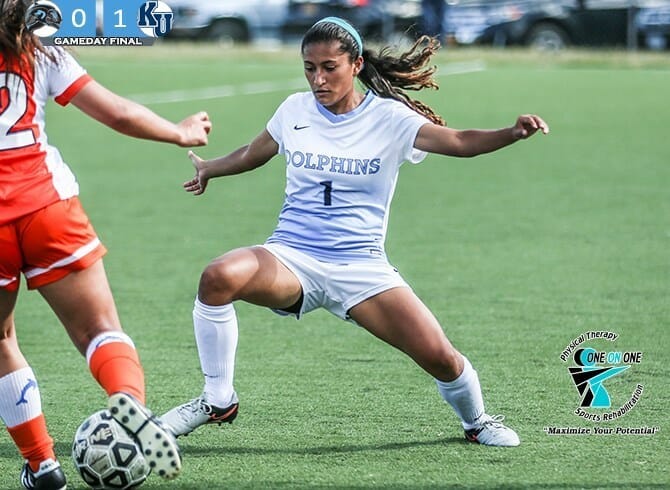 A goal in the fourth minute ended the College of Staten Island women’s soccer team’s shutout streak, and it would stand the full 90, as the Kean University Cougars handed the Dolphins a 1-0 defeat at Alumni Field in Union, NJ, as part of non-conference play.  The Cougars evened at 4-4 on the season, while the Dolphins fell to 5-1-1.

Kean registered their first shot of the game just two minutes in, as a Sabrina Pascarella shot was parried by CSI keeper Nicole Mignone, keeping the Dolphins’ shutout streak of 588 minutes coming into this game intact.  Two minutes later, however, Kean fired the shot that would go on to seal the game.  Jordyn Bronsky shoveled a pass over to Pascarella that Pascarella immediately fed back to Bronsky who raced in front of goal and jammed the ball home.  The goal came at 4:52.

From there, the Cougars were in control in the first stanza, camping around the CSI goal after rushes up the field.  Many of their shots, however, drifted wide, as Mignone would go on to make two more saves out of another 12 Kean shots.

The Dolphins did not register a single shot in the first stanza, and that had to change if CSI wanted to claw their way back.  Their tempo picked up in the second frame.  The Dolphins had a nice chance off of a corner in the 68th minute, but a Kaitlin Russo shot attempt was swept away by the KU defense in the box.    In the 77th minute, KU keeper Lauren Healey made her first official save of the game on a Lauren Smith strike.

Despite more chances by KU, the Dolphins defense held true, and by the time the final whistle sounded Kean’s 86-munite lead stood as a 1-0 final.

The Cougars finished with a 22-5 edge in shots (8-3 on goal), while holding a 6-1 edge in corner kicks.  This was the first-ever meeting between the two schools.  In a bizarre twist, Kean agreed to play the game in practice pinnies attached to their uniforms, due to color similarities between the two sides.  The pinnies actually belonged to the Dolphins, who travel with bright yellow practice tops, providing enough of a color difference to satisfy the officials.

The Dolphins will next be in action on Thursday, when they host St. Joseph’s – Brooklyn at the CSI Soccer Complex at 4pm.  The Dolphins defeated the Bears last season, 10-0.