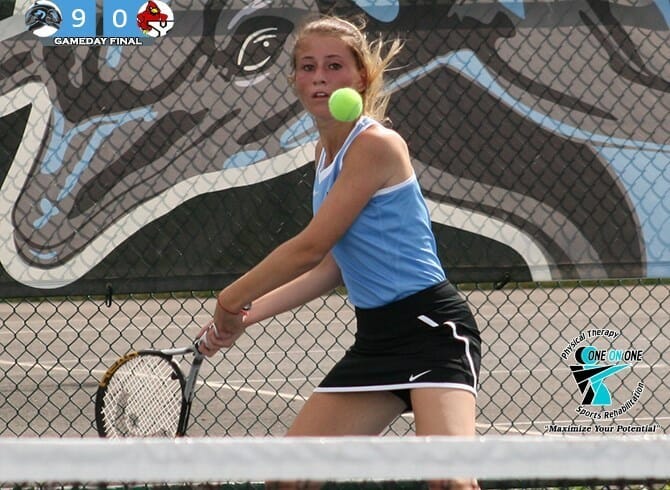 BOXSCORE – The College of Staten Island women’s tennis team was playing their second match in as many days and the Dolphins were successful at winning again, this time turning back visiting York College in their CUNYAC opener, 9-0.  CSI leveled to 2-2 overall and advanced to 1-0 in the CUNYAC, while the Cardinals fell to 0-2, 0-1, respectively.

Right out of the gate, CSI was awarded a 2-0 lead via default, due to lateness on the court by the Cardinals team, forcing the officials to concede York’s No. 2 and 3 Doubles flights.  The match, that was supposed to start at 12:00 pm started at 12:40 instead, and when play picked up it was all CSI.  Starting with the remaining doubles match, CSI’s duo Tristiana Adragna and Dana Friedman scored a powerful, 8-0, win over York’s Kaithlyn Taylor and Dominique Thelwell.

In Singles, CSI was just as crisp, as Nos. 1-5 singles all won by identical 6-0, 6-0, scores.  Nozima Toshpulatova won at the top position, followed by Adragna, who played for the first time at the No. 2 slot.  At No. 3 Michelle Kushnir took the win, while Dana Friedman scored a winner at No. 4 and Hannah Bruschi did the same at No. 5.  In the No. 6 position, Guetanie Romain scored a 6-0, 6-1, win over YC’s Alana Johnson.

Now sporting a two-game win streak, CSI will look to stay hot when they play Rutgers-Newark at 4pm on Tuesday afternoon at the CSI Tennis Center.