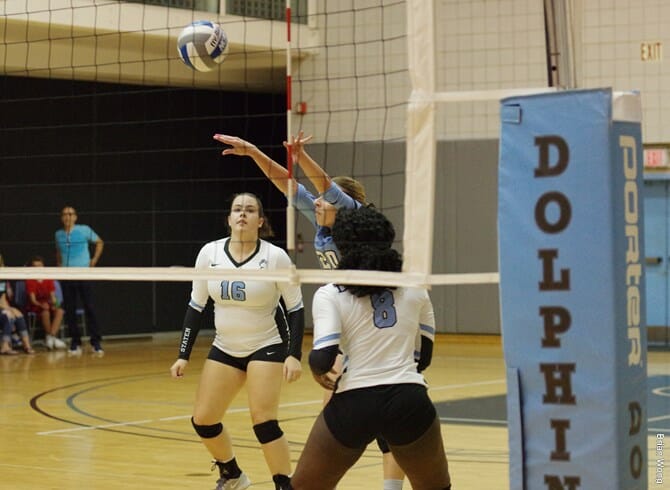 The College of Staten Island women’s volleyball team put forth a good road effort but in the end the Bearcats of Baruch College were too much, as CSI fell in straight sets.  Baruch won the match by scores of 25-21, 27-25, and 25-14, sending CSI to 2-6 overall and 1-3 in the CUNYAC.  Baruch improved to 6-5, 3-1, respectively.

In the first set, Baruch got out quickly to a 6-1 lead thanks to two kills by Katherine Chen.  CSI stormed right back to take an 8-6 lead, and continued to hold the lead until the middle stages, until another Chen kill gave BC a 16-15 edge.   A Margaret O’Malley-Rebovich kill got CSI to within 21-18, but Baruch was able to persevere, winning by four.

A Caitlin Esposito kill got CSI started in the second set with a 4-3 lead, and even after CSI fell behind 10-8, the Dolphins came back.  Vanessa Reyes gave CSI back the lead at 12-10, and later, a 6-0 run by the Dolphins made it 20-17 in their favor late, helped along by a Teresa Maresca service ace.

In the final set, the Bearcats led from start to finish, taking as much as a 20-7 lead before settling for the 11-point win.

CSI was led by Maresca’s seven kills, while Reyes and Esposito scored five each.  Jessica Cafiero tallied 22 assists and a team high 12 digs.  Yija Chen and Katherine Chen both had 12 kills for Baruch, with Danielle Naggar adding 13 digs.

CSI is back in action this weekend, when they host both Brooklyn and William Paterson in a non-conference trimatch beginning at 11:00am at the Sports & Recreation Center.