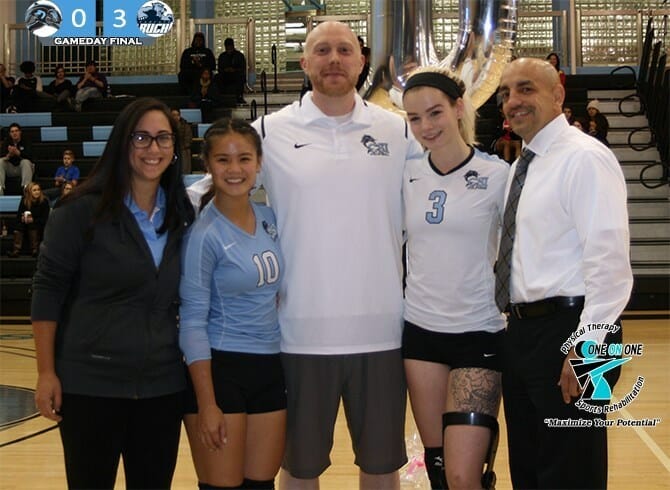 The College of Staten Island women’s volleyball team played in their final home match of the season tonight against Baruch College.  Tonight was not just another CUNYAC match as it was senior night and the Dolphins honored Siobhan Granich and Victoria Wong. With the win tonight Baruch College improves to 11-21 overall and 7-1 in the CUNYAC while the Dolphins drop to 7-15 overall and 3-5 in the CUNYAC.

Senior night did not open the way the Dolphins had hoped. CSI turned out a record crowd for volleyball to show support for their fellow athlete’s as well as the two tenured seniors.  Baruch was unfazed by the loud crowd and opened up play on a 6-0 run which caused Head Coach Jason Madsen to call a timeout to try and cool off the Bearcats.  The timeout would prove to work as the very next point would go in the Dolphins’ favor as Granich would rise above the net and slam one into the court.

The Dolphins were unable to keep control of the ball in the opening set, as every time they had their opportunity to serve they would give it right back to the Bearcats who would go on yet another run.  Baruch led 16-3 late in the set but the Dolphins refused to give in.  CSI would put up a fight towards the end however it was too little too late as the Bearcats would close out the set and go on to take a 1-0 lead.

Staten Island would stay level with Baruch for the early goings of the second set.  The Dolphins would lose their momentum when Akilah Meulens gained control of the ball and was able to send the Bearcats on an 11-1 run which put them in the lead 19-9.  Skenderjie Mila was the lone scorer on that run for the Dolphins and was able to put the Dolphins within 10 late with another kill down the line.  Wong, despite the score line continued to defend that back line with digs to keep rallies alive. The Bearcats were able to take care of business in the second set to take a 2-0 lead over the Dolphins.

Heading into what would be the final set, the Dolphins knew they needed to come out and give it their all on their home court for the final time this season.  CSI played their best set of the night but the Bearcats’ experience and leadership was just too much for the Dolphins to overcome.  Staten Island trailed 16-20 in the waning moments of the match and were able to tally three more points but the Bearcats would reach 25 before the Dolphins were able to complete their comeback.

Vanessa Reyes (.042) finished the match with four kills on 24 attacks while leading the team with three service aces.  Jessica Cafiero led the way with 15 assists while also tallying eight digs, good for second on the team behind Wong who had 23.

Staten Island will return to action on Thursday, October 27 where they will travel to take on St. Joseph’s College – Brooklyn at 7:00 pm.