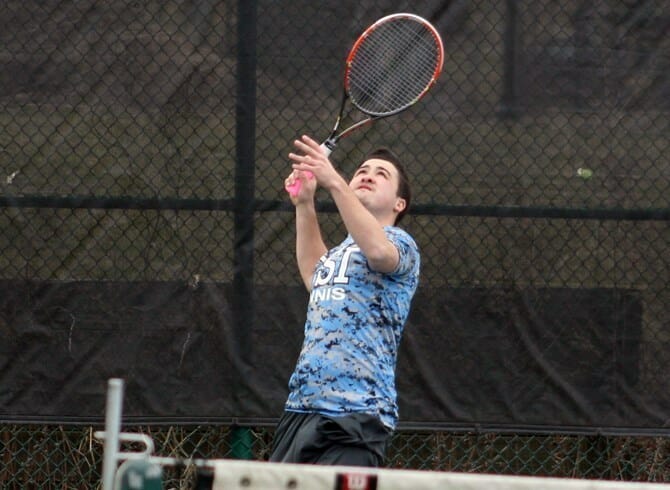 On the wind-whipped tennis courts at the College of Staten Island, the Dolphins got off to a good start to their 2015 season, blanking visiting City College of New York by a 9-0 count as part of City University of New York Athletic Conference play at the CSI Tennis Center.  The Dolphins improved to 1-0 overall, while the Beavers start their campaign at 0-1.

Both teams faced a fierce opponent in Mother Nature today, as the winds at CSI exceeded over 30 miles per hour, obviously playing havoc with the trajectory of the ball with each hit.  The Dolphins weathered that storm well, and likewise took care of the Beavers.

Play started with doubles and CSI got off to a quick, 3-0, start.  In the top spot, Ed Ruffe teamed with freshman Andrew Adia to post an 8-1 win over CCNY’s tandem of Augustinus Hadiputro and Andrew Chen, while one flight lower, senior Austin Kapetanakis teamed with frosh Chris Livoti to score an 8-2 winner over CCNY’s Michael Benavidez and Max Bernstein.  Chris Pinto doubled with Raymond Hwang in the third spot for the Dolphins, and they were crisp in an 8-1 victory.

When play shifted to singles, CSI won all of the flights in straight sets.  Kapetanakis and Livoti, at Nos. 2 and 3 respectively were convincing in 6-0, 6-0, wins, while Ruffe posted a 6-1, 6-1, winner over Hadiputro in the pole position.  Adia and Hwang both posted 6-2, 6-2, wins at the Nos. 4 & 6 positions.  Over in the No. 5 slot, Pinto posted a hard-fought 7-6 (7-4) win in the opening set against Bernstein, before scoring a 6-0 win in the second set to close the match and preserve CSI’s shutout.

CSI’s next match will be eight days from today on Wednesday, March 25, when they travel to face St. Joseph’s College (LI) for a 4:30pm, non-conference match.