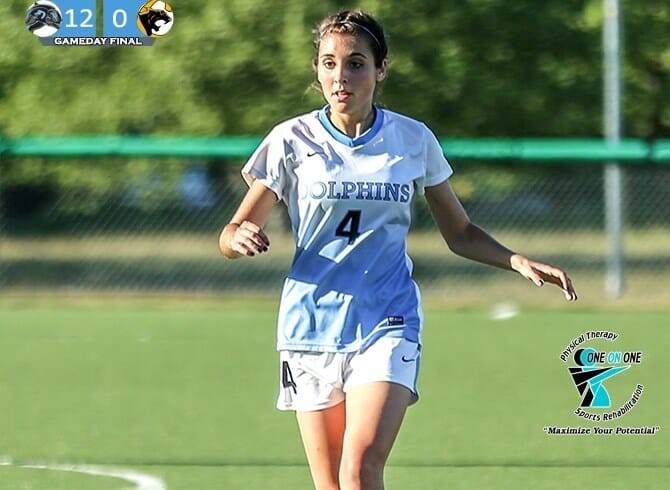 The College of Staten Island women’s soccer team emphatically broke back into the win column today, breaking a two-game skid with a 12-0 win over visiting Medgar Evers College as part of CUNYAC play at the CSI Soccer Complex.  The win lifted the Dolphins to 7-3-1 overall and a perfect 3-0 in conference play, while the Cougars fell to 0-7, 0-4, respectively.

The Dolphins scored early and often in this one, pulling away with relative ease and then putting on the brakes midway through.  The game started with a one-hour delay, as the visiting Cougars struggled to get a full team together, settling to start the game with just seven players.  That said, the game lasted just 76 minutes, as game fatigue coupled with the score and steady rainy weather made for the suspension scenario.

CSI’s game-winner was scored just 2:36 in, when sophomore Lauren Smith stole what was a goal kick right at the top of the 18-yard box and dribbled in briefly before tucking in a direct shot past MEC keeper Kenia Diaz.  The unselfish Dolphins continued to move the ball around with ease, and at 4:54 they doubled their lead when Krystina Rodriguez executed a goal off of a give-and-go with Stephanie LaPointe.  At 6:23, a sterling 1-2 combination saw Rodriguez deliver a pass to Kaitlin Russo, who popped a pass across to freshman Krista Anson who smashed one home to make it 3-0.  CSI made it 4-0 inside of 10 minutes in, when Rebecca D’Aloia scored her first career goal on a point-blank smash off of a rebound on her own shot.

The Dolphins continued the onslaught of goals almost routinely in-between the 15 offsides calls they sustained.  At 12:21, Russo got a goal of her own when she skied a ball over the keeper in a one-on-one breakaway attempt on another LaPointe feeder.  Three minutes later, Catherine Mulligan scored her first gaining a short pass at midfield from Natalia Sandor to convert on a one-on-one break.  At 16:37, Lizabeth Aparicio took a pass on the right sideline from Adrianna Parello and went in alone and tucked a sharp angle shot in to make it 7-0.

Freshman LaPointe added a goal to make it 8-0 on what was Rodriguez’ second assist, and less than a minute later, LaPointe gained her third assist when a short pass at midfield found Sandor that she broke away with and chipped over Diaz.  As CSI’s substitutions continued to flood in, they also removed players from play altogether.  At 26:04, Concetta Perito scored her first tally of the year again off of a LaPointe feed in the box, her fourth assist of the afternoon.  That made it 10-0.

To cap the first half, reserve Samantha Guillen knocked in a goal at 32:30, a gorgeous bending ball in the box that beat an outstretched Diaz on an assist from Perito.

The Dolphins registered 11 goals on 22 first half shots, while Diaz made four saves.  For the final minutes of the first half and nearly all of the second frame, CSI retained possession only and did not opt to shoot the ball on many of occasions.  Still, Maryana Chaykovska scored her first collegiate goal at 46:29, taking a shot off of a Diana Estrada assist and putting in a low shot that Diaz appeared to have wrapped up but fumbled into the net.

The Dolphins had 12 different goal scorers in the game and out-shot MEC in the 76-minute affair, 24-0.  Nicole Mignone did not have to make a save in her 6th shutout of the season.  For Medgar Evers, it marked their 64th-straight loss.

LaPointe’s four assists are tied for the third highest in CSI single game history, and are the most since Melissa Gelardi set the CSI record with 9 in a single game in 2013.  She became only the sixth player in CSI history to ever record three or more assists in a single game.

The Dolphins will now have a brief rest before they get back on the field tomorrow against Stockton University for a non-conference tilt at 2:30pm at the CSI Soccer Complex.