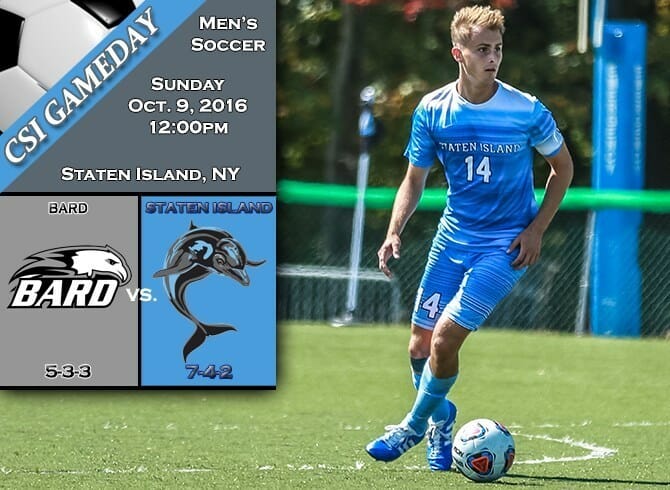 The College of Staten Island men’s soccer team is coming off of a last-minute victory over Hunter College this past Wednesday, and will look to keep the momentum going this weekend, as they will face Bard College in a non-conference test at 12:00pm at the CSI Soccer Complex.  The Dolphins are also celebrating Senior Day this afternoon as they will honor their 9 seniors prior to kickoff.

CSI vs. BARD COLLEGE AT-A-GLANCE
Matchup:  CSI (7-4-2 Overall, 4-1-1 CUNYAC) vs. Bard College (5-3-3 Overall, 0-3 Liberty)
Where: CSI Soccer Complex – 2800 Victory Boulevard, Staten Island, NY
Kick-Off: 12:00 pm
Live Video:  http://www.csidolphins.com/CSISportsNet
Live Stats:  http://www.sidearmstats.com/csi/msoc/
All-Time Series:  CSI leads 2-1
Last Year’s Meeting: Bard won, 2-0
Players to Watch (CSI): Junior Adrian Cosovic is now on a two-game goal-scoring streak and is positioned second on the squad with six goals.  He leads the squad with 49 total shots.  Marcin Klim continues to pace the team in goals with 9 on 39 shots, while sophomore Ali Fares leads all Dolphins with four assists.  Jake Foeldes notches his fifth solo shutout on Wednesday, and sports a 0.53 goals against average with a .875 save percentage.
Players to Watch (BC): Nick Shenberger is the offensive catalyst with seven goals and a team-high 32 shots.  Austin Higgins follows closely for the Raptors with four markers.  John Flynn has a team best three assists in his 11 starts.  Taylor Bond has been good in goal.  He sports a .808 save percentage with a 0.91 goals against average.
News and Notes: This is only the fourth game ever between these two sides.  The first meeting was back in 2012, a 1-0 CSI win, and the Dolphins won again, 3-0, in 2013.  Last year Bard took a 2-0 win after the teams did not play in 2014.  This is the first meeting in Staten Island since the 2013 game.  The Dolphins are yielding just 0.66 goals per game, one of their lowest marks since a school record 0.43 average back in 1977.  Jake Foeldes’ .875 save percentage is currently the second-highest in school single season history.  The record was set by Valon Osmani in 2003 with .898.  The Dolphins will be honoring 9 seniors today prior to kickoff.  They are: Rustam Djumayev, Mohamed Ndao, Ilir Papraniku, Ruben Diaz, Nermin Kurtesi, and four-year seniors Antonio Lynch, Peter Hanna, Marcin Klim, and Jacob Szumanski.