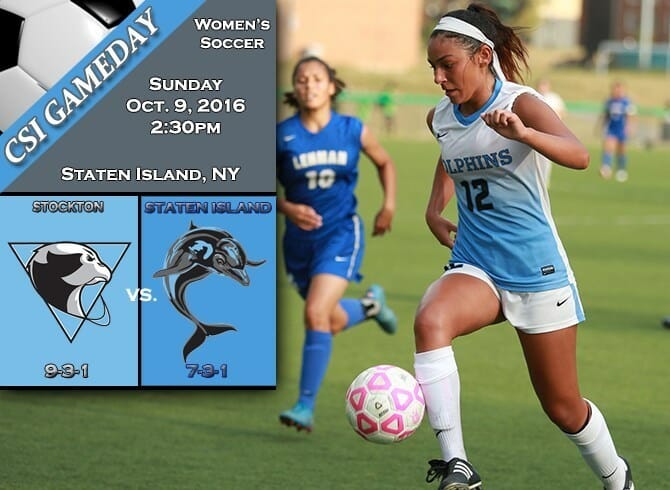 The College of Staten Island women’s soccer squad is playing on back-to-back days and will this time host a non-conference date with Stockton University.  Game time is scheduled for 2:30pm and will follow the men’s soccer game against Bard College at 12 Noon.  The Dolphins recently snapped a two-game losing skid yesterday against Medgar Evers.

CSI vs. STOCKTON UNIVERSITY AT-A-GLANCE
Matchup:  CSI (7-3-1 Overall, 2-0 CUNYAC) vs. Stockton University (9-3-1 Overall, 3-1-1 NJAC)
Where: CSI Soccer Complex – 2800 Victory Boulevard, Staten Island, NY
Live Video:  http://www.csidolphins.com/CSISportsNet
Live Stats:  http://www.sidearmstats.com/csi/wsoc/
All-Time Series:  First Meeting
Players to Watch (CSI):   The Dolphins featured 12 different goal scorers yesterday in the win vs. Medgar Evers.  Freshman Krista Anson scored her fifth of the season and is now second on the team in that department despite missing the first three games of the season.  Krystina Rodriguez is the team leader in assists with eight, while Stephanie LaPointe notched four yesterday alone to now give her five on the year.  Nicole Mignone in net sports a 1.01 goals against average with a save percentage of .706.
Players to Watch (SU): Adrianna Boucher is the team leader with 9 goals and four assists and also has the squad lead in shots with 42.  Jill DiBlasi can also be counted on for offense and has 29 shots this season and three goals.  Lindsey Thomas is second on the squad with both five goals and three assists.  Goalkeeper Nicole Pallante has seen a majority of time between the pipes.  She has five shutouts and a 1.02 goals against with a .723 save percentage.
News and Notes:  This is the first meeting in school history between these two sides.  SU is on a two game win streak, and have only lost one of their previous five matches.  The two teams share two common opponents.  SU defeated Kean 3-1 while CSI lost 1-0 to the Cougars.  Both teams also struggled against Montclair State.  The Dolphins lost 7-1 to the Red Hawks while the Ospreys fell to them 5-1.