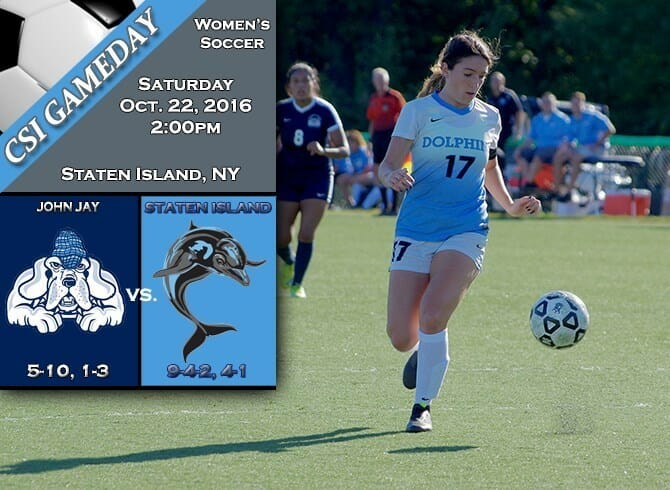 The College of Staten Island women’s soccer team is going to celebrate Senior Day this afternoon when they play their regular season finale against John Jay College at the CSI Soccer Complex at 2pm.  The game will carry heavy playoff implications for the Dolphins, as the CUNYAC Regular Season Championship could be on the line.

CSI vs. JOHN JAY COLLEGE AT-A-GLANCE
Matchup:  CSI (9-4-2 Overall, 4-1 CUNYAC) vs. John Jay College (5-10 Overall, 1-3 CUNYAC)
Where: CSI Soccer Complex – 2800 Victory Boulevard, Staten Island, NY
Kick-Off: 2:00 pm
All-Time Series:  CSI leads 13-0-2
Last Year’s Meeting: CSI won 1-0 (OT)
Players to Watch (CSI):  The Dolphins will be hoping for big games from their senior duo of Jennifer Cosenza and Senda Karagozler, who are playing in their final home game of their respective careers this afternoon and will be honored before the game.  Cosenza is the team leader with 11 goals, while Karagozler has posted a pair of goals on 12 shots this season.  Adrianna Parello will look to help anchor a back line that has yielded just one goal over the last five games.
Players to Watch (JJC): The Bloodhounds have scored 22 goals this season, and 10 of them have been recorded by Kali Moss, so she will be a prime figure in the JJC attack today.  Playmaker Sydney Solimani leads the squad with four assists and has posted 31 shots, good for second on the team.  Kelli Doherty will be leaned on to steady the goalkeeping duties.  She has a .648 save percentage with a 4.13 goals against average.
News and Notes: This has been a series owned by the Dolphins, as CSI has never been defeated by the Bloodhounds in the series’ 10-year history.  The Dolphins are 13-0-2 against JJC and 8-0-1 all-time at home.  In fact, the Dolphins have not yielded a goal in this series since 2005.  Overall, CSI has won the last eight meetings, outscoring JJC in the process, 29-0.  That said, these two teams played a very entertaining 1-0 game last year, and won in the 99th minute on a goal by Samantha Wysokowski.  Today’s game has heavy playoff implications for both teams.  A CSI win would guarantee the Dolphins second place in the final standings, and coupled with a Brooklyn College loss to Lehman, it could win them the Regular Season Championship.  Meanwhile, a John Jay win would clinch them a playoff spot and fourth place in the standings.  A loss by John Jay and they’d be forced to win their final game of the season in order to make the playoffs.