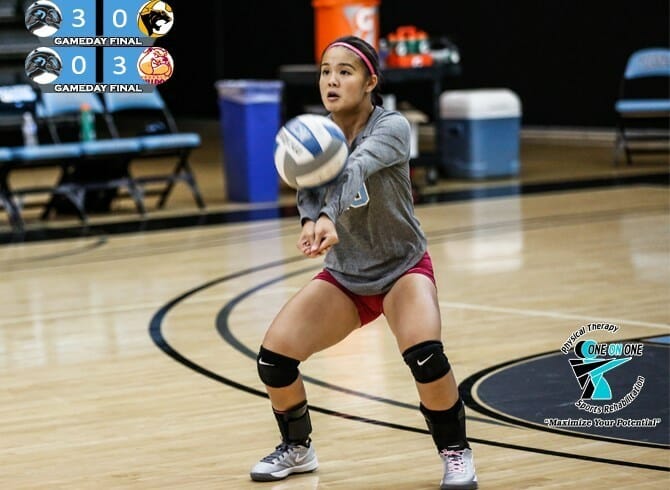 The Dolphins held a lead against the Bulldogs in every set this afternoon but were unable to hang on and fall in straight sets.  Staten Island opened up the first set down 6-2 before a four-point rally tied the game up at six with kills from Skenderjie Mila and Angelica Paulino.  CSI would slowly gain momentum after Brooklyn committed some errors to give the Dolphins the lead.  The Bulldogs would not allow the Dolphins to hang onto the lead for long as a four-point swing on the back of three aces handed Brooklyn a 15-11 lead.

Head Coach Jason Madsen called a timeout to cool off the Bulldogs off, a call that would seem to work.  The Dolphins would come out of the timeout and gain control of the ball and score three straight points aided by an ace by Jessica Cafiero to put the Dolphins within two, 14-16.  CSI’s rally would be quelled by a six-point run by the Bulldogs as the Dolphins had no answer for Christolia Butler who collected three kills on that run.  CSI would regain the ball but put it right into the net on the server and hand it back over to Brooklyn who would take a 1-0 lead after a kill by Francesca LoCascio.

The Dolphins would hit their best of the series in this match but still fall to the Bulldogs 25-14. The Bulldogs raised their play in the second set and would go on to hit .233 as a squad with 14 kills and only four errors while CSI would collect six kills on seven errors.

After playing out to a near draw early on, with points flipping back-and-forth the Dolphins were finally able to take a 10-9 lead over Brooklyn.  However, much like the first set the Bulldogs would not allow the Dolphins to hang onto the lead for long as they would go on a 5-0 run.  CSI would be unable to gain a foothold in this set as Brooklyn continued to go on runs.  The Bulldogs would end the set and take a 2-0 lead with a 6-0 run with three kills by Sarina Rozek.

The third and final set would be the closest of the three as the Dolphins showed promise and refused to give up.  In this set the Dolphins would have to battle back from an early deficit but would come just short in the end as they would fall 25-22.

Vanessa Reyes was able to keep in close by forcing her opponents to mishandle the ball with her power to cause a tie midway through the match.  Like the previous two sets however, the Bulldogs had an answer and would go on a small 3-0 run to take a 17-15 lead over CSI.  Siobhan Granich served the ball into tricky locations for the Bulldogs defense which caused attacking errors and allowed the Dolphins to tie it up at 17.  Play switched back-and-forth from this point forward with each team matching each other’s play and scoring when the opportunity presented itself.  A late service ace by the Bulldogs would give them the lead for good as CSI would fall behind 23-20 and was unable to recover.

After dropping three straight sets earlier in the day to Brooklyn College the Dolphins took to the court determined to pick up a win this afternoon.  CSI did just that with a sweep of Medgar Evers.
The Dolphins hit their best of the day in this match and only committed 9 errors.

CSI jumped out to a large 11-3 lead led by a pair of aces by Granich. The Cougars struggled to match the Dolphins’ strong play as CSI found the open pockets in the Cougar defense. Cafiero would increase the Dolphins’ lead to 20-10 by assisting Granich and Reyes.  CSI would go on to win the first set 25-11 and take a 1-0 lead in the match, a lead they would not squander.

The women would have their best game of the afternoon in the second set as they would hit .304 as a team with 10 kills and just three errors. Superb serving by Granich saw the Dolphins jump out to a 12-2 lead.  CSI would cruise for the rest of the set to a 25-9 win and a 2-0 lead in the match.

The third and final set was a combination of mini runs to give the Dolphins their fifth with of the season. After falling behind 6-5 to the Cougars Paulino and Mila would secure five straight kills to give the Dolphins a 10-6 lead.  Mila would collect 11 kills during this match, a majority coming in the third set.  Cafiero was very efficient in the match against Medgar as she would go on to collect 17 assists.  CSI would go on to defeat Medgar Evers 25-14 in the third set and move to 3-3 in the CUNYAC on the year.

CSI will return to action this Saturday, October 15 in another tri-match at the CSI Sports & Recreation Center against Sarah Lawrence and William Paterson University.