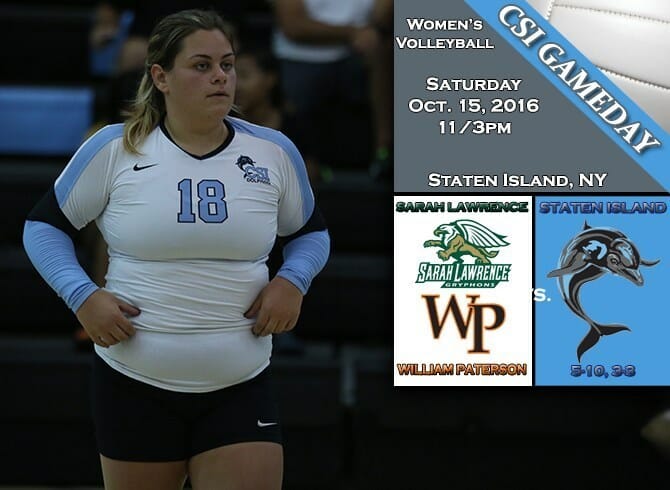 The College of Staten Island women’s volleyball team will be playing two non-conference matches this afternoon.  The Dolphins will open the tri-match against Sarah Lawrence College at 11:00 am and go on to close the day against William Paterson. Staten Island will look to get revenge against the Gryphons as they were swept earlier in the year.  CSI will also look to pick up their first win against William Paterson ever at 3:00 pm.

CSI vs. SARAH LAWRENCE COLLEGE / WILLIAM PATERSON UNIVERSITY AT-A-GLANCE
Matchup:  College of Staten Island (5-10 Overall, 3-3 CUNYAC) vs. Sarah Lawrence (12-7, 4-3) & William Paterson (12-9, 1-5)
Where:  Sports & Recreation Center – 2800 Victory Boulevard, Staten Island, NY
First Serve: 11:00 am
Live Video:  http://www.csidolphins/CSISportsNet
Live Stats:  http://www.sidearmstats.com/csi/wvball
All-Time Series (Since 2000):  SLC leads 3-2 / WPU leads 10-0
Last Result:  SLC won 3-0 / WPU won 3-0
Players to Watch (CSI): Skenderjie Mila collected 11 kills in their last match against Medgar Evers and also hit .250.  Vanessa Reyes was the best hitter on the team in that match with .667 hitting, collecting six kills on 9 attacks.  Victoria Wong tallied 15 digs in the back line which led the squad against the Cougars.
Players to Watch (SLC):  Francesca Kohani is leading her team with 190 kills this season with a .200 hitting percentage.  CJ Kelley has had tremendous success this season passing the ball around and has collected a team high 411 assists.
Players to Watch (WPU):  The Pioneers have four players with 100+ kills this season.  Alyson Toman leads the way with 195.  Setting all four of those players up has been Kendall Caruso and has earned 590 assists on the year for her outstanding passing ability.
News and Notes: The Gryphons and Dolphins have already squared off earlier this season with the Gryphons coming out on top with a 3-0 sweep.  When it comes to CUNYAC opponents the Gryphons boast a 5-1 record against them with their only loss coming in a five set loss to Brooklyn College. The Pioneers will come into today’s tri-match on a two match losing skid.  William Paterson, much like Sarah Lawrence, has had success against CUNYAC opponents this season, going a perfect 5-0 which includes a five set win over powerhouse Baruch College.