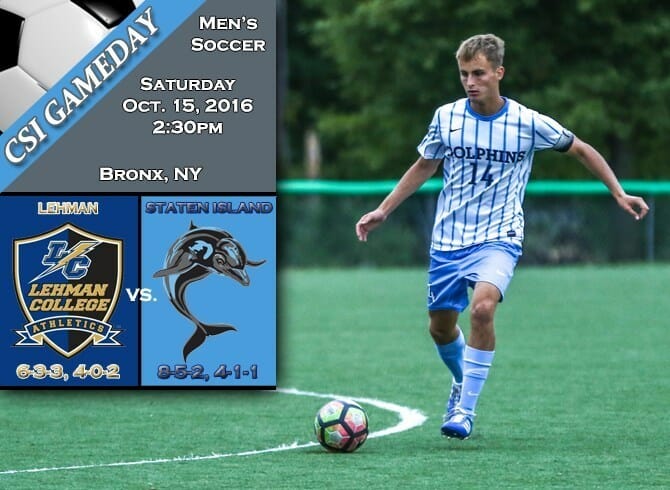 The College of Staten Island men’s soccer team will head to the Bronx, NY for a huge CUNYAC tilt against undefeated Lehman College.  The Dolphins have just two CUNYAC games remaining on their schedule and will need to win out and have CCNY drop a game to claim the CUNYAC Regular Season title.

CSI vs. LEHMAN COLLEGE AT-A-GLANCE
Matchup:  CSI (8-5-2 Overall, 4-1-1 CUNYAC) vs. Lehman College (6-3-3 Overall, 4-0-2 CUNYAC)
Where: Lehman College South Field – 250 Bedford Park Boulevard West, Bronx, NY
Kick-Off: 2:30 pm
Live Video:  http://lehmanathletics.com/watch/?Live=131
Live Stats:  http://www.sidearmstats.com/lehman/msoc/
All-Time Series:  CSI leads 13-9-1
Last Year’s Meeting: CSI won 1-0
Players to Watch (CSI):  Adrian Cosovic has been on fire recently, scoring a goal in three of his last four contests. Not only has Cosovic been scoring but he has been scoring crucial goals to help lift his team over their opponents. Ruben Diaz recently earned CUNYAC Defender of the Week for the first time this season with a two shutout performance on the defensive unit. Ali Fares has been picking defenses apart this season with his sublime passing and leads the Dolphins with six assists.
Players to Watch (LC): The defensive unit of the Dolphins will have to keep their eye on Essosa Aluyi as he has scored five goals this season in just 9 games. The Lightning have used several goalies this season with Irvin Barreto getting five starts and playing in 9 games for 643 minutes.  Barreto has allowed eight goals this season and has made 32 saves.
News and Notes: The Lightning play well at home and have a 3-1-1 record on their home pitch this season. Lehman will also head into today’s game on a three-game win streak.  The Dolphins have won just two of the last five meetings between these two teams and will hope to better that record this afternoon. The last time CSI and Lehman faced off at Lehman was back in 2014 where the Lightning defeated CSI 7-3.