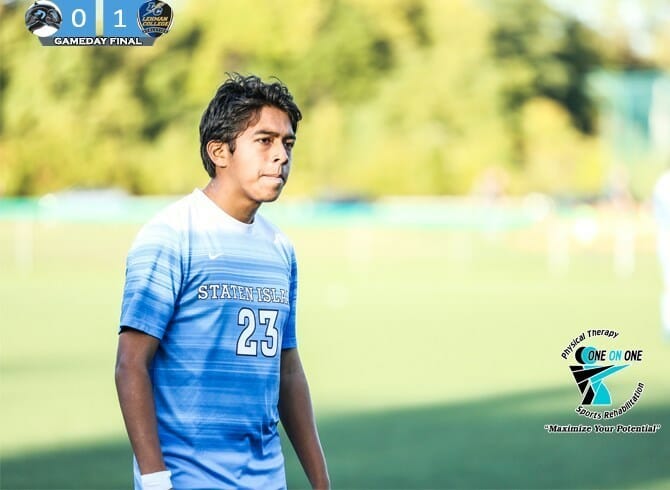 CSI came into today’s game coming off of a 2-0 loss to Stevens Institute.  This is the second time this season that the Dolphins have dropped two straight.  With the loss this afternoon the Dolphins fall to fourth place in the CUNYAC table while Lehman and Hunter remain at the top.

After playing on turf for a majority of the season the Dolphins took to a pitch that was a combination of grass and infield dirt from the connecting baseball field.  Staten Island and Lehman College would play out to a draw in the first half with the Dolphins holding 5-0 edge in shots as well as a 3-2 lead in corner kicks.

The Dolphins stout defense was on display all game stopping everything the Lightning could muster up offensively.  Lehman would catch a break however in a home field advantage type play where Jake Foeldes would slip in the aforementioned infield dirt which allowed Essosa Aluyi to put the rebound in the back of the net.

Dardan Nika nearly tied the game up at 1-1 however his opportunity would hit the side of the net and allow the Lightning to take a sigh of relief.  The Dolphins remained relentless bringing attack after attack.  CSI once again almost tied the game up on a set piece but were unable to convert the opportunity.  As time started to whittle down the Dolphins began bringing more numbers forward which almost allowed the Lightning to double up.  King Owusu would knock one off of the crossbar and then send the rebound high and over the bar.

With just five minutes remaining in the game and the Dolphins in all-out attack mode the Lightning were perfectly content with parking the bus and playing out to a 1-0 win.

The Dolphins will play their final CUNYAC game of the season on Wednesday, October 19 against John Jay College at 4pm at Randall’s Island Field #83.