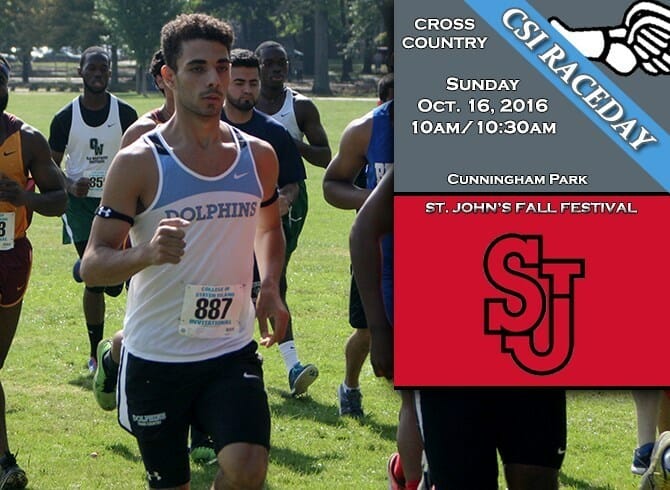 The College of Staten Island men’s and women’s cross-country squads continue their racing season this morning, as they will travel to Cunningham Park to participate in the St John Fall Festival. In the two races the men have placed in this season, nothing has been lower than fifth place while the women have bounced around in the top 15.

CSI @ ST. JOHN’S FALL FESTIVAL AT-A-GLANCE
Meet Details:  Women 5K / Men 8K
Where:  Cunningham Park
Race Time: Women: 10am / Men: 10:30am
Last Year’s Result:  DNP
Players To Watch (Women):  Tristiana Adragna has proven to be a nice addition to the team this season and will continue to show her potential as she will look to help the Dolphins place near the top of this morning race. Veronica Lorenzo has proven she can carry the Dolphins team to victory as she has done before, a race that earned her CUNYAC Rookie of the Week.
Players To Watch (Men): Luke Jackson is coming off of a superb performance at the CSI Invitational, clocking a time of 28 minutes in an 8K at Clove Lakes Park which earned him CUNYAC Performer of the Week. Liam McMunn knows how to win and will try to put his best time up this season and help lift the Dolphins to a top three finish.