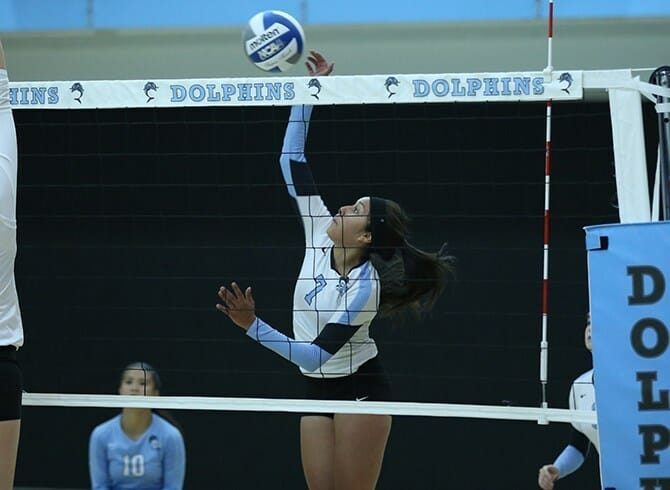 The College of Staten Island women’s volleyball squad fell for the third-straight time this evening, suffering a 3-0 setback to CUNYAC leaders Hunter College in a match played at Hunter College in Manhattan.  The Dolphins fell to 6-13 overall and 3-4 with the loss, while the Hawks lifted to 17-11, 8-0, respectively.  Final scores of the sets were 25-9, 25-22, and 25-15.

Hunter asserted their will in the first set, using a 5-0 run to take a 7-2 lead.  They then pulled away by scoring the final seven points of the frame as well, helped along by three straight Haley Trunkett aces.

The Dolphins were crisper in the second set and were nearly able to score the win.  A Vanessa Reyes got CSI started on a 2-0 lead, and CSI took an 8-5 lead thanks to a 5-0 spurt guided by a Skendirjie Mila kill.  CSI continues to keep Hunter at bay and eventually matched their biggest lead at 21-17 aided by a Siobhan Granich kill.  But again, Hunter had a great response to end the match, this time posting an 8-1 run.  Taylor Kerr-Haiduk was the force for the Hawks posting six kills in the stretch, almost single-handedly winning it for her team.

A deflated CSI could not muster up as good of a fight in the third as Hunter was able to take an early 6-2 lead and led wire-to-wire from there in the 25-15 win.

Kerr-Haiduk led all players with 16 kills, adding four aces.  CSI was led by Mila’s six kills, while Victoria Wong led with a pair of aces.  Wong was also the defensive leader with 17 digs, while HC countered with Trunkett’s 13 defensive stops.

The Dolphins will be back in action on Saturday, when they host a trimatch at the Sports & Recreation Center.  They will host New Jersey Institute of Technology at Noon, and then Medgar Evers at 4pm.