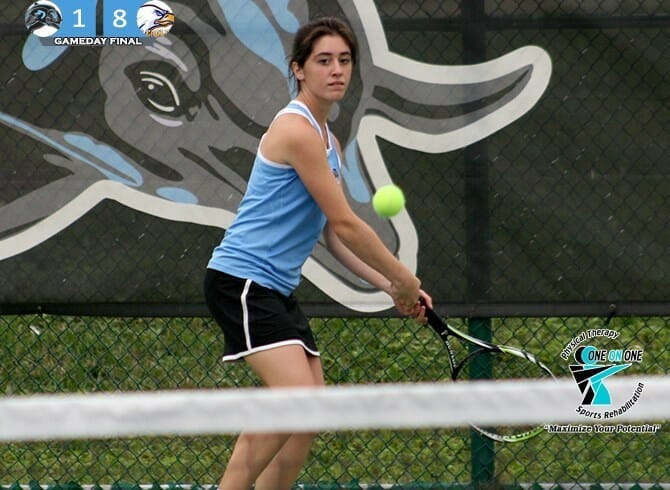 BOXSCORE – Short-handed on a Sunday afternoon, St. Joseph’s College of Long Island was able to score an 8-1 winner over the College of Staten Island women’s tennis team as part of non-conference play at the CSI Tennis Center.  The win catapulted the Golden Eagles to 7-2 overall, while the Dolphins fell to 3-5.

The Dolphins were without No. 1 Singles player Nozima Toshpulatova and Aziza Jurabaeva, so the Dolphins had to shuffle their lineup somewhat and it would reverberate throughout.  Play began with doubles and SJC got off to a quick 2-0 advantage after wins at the Nos. 2-3 positions.  Things were a lot tighter at the top, where CSI’s pair of Michelle Kushnir and Dana Friedman were in a dead-heat with SJC pair Amanda Post and Victoria Panicola.  After CSI grabbed a modest, 4-3, lead, the Eagles dup would battle back, and would take the lead and ultimately prevail, 8-6.

When play turned to singles, SJC was able to officially clinch the match thanks to the bottom of their order.  At No. 5, Nora Burnett scored a 6-0, 6-1, win over CSI newcomer Diana Sanchez, who played in her first collegiate match.  Shortly after, Emily Portal registered a 6-1, 6-1, winner over Guetanie Romain.  Also playing in her first match of the season was junior Viktoriya Volkova, who battled hard but also fell at No. 4.

Things again, were tighter at the top.  Kushnir, playing for only the second time at No. 1 volleyed well with SJC ace Amanda Post, but Post was able to secure a 6-2 win in the first set and then came-from-behind to win the second set via tiebreak 7-6 (7-2) after being down 6-5.

Down 8-0, CSI looked to avoid the shutout and they did just that via freshman Tristiana Adragna.  The freshman outlasted Panicola, 6-4, in the first set, and then cruised to a 6-1 winner in the second set to clinch her second-straight singles win and run her record up to 5-3 this season, the best mark on the team.

The Dolphins will be idle tomorrow, and will regroup on Tuesday to face John Jay College at the National Tennis Center at 4pm.  The match is a make-up from a previously cancelled contest in mid-September.