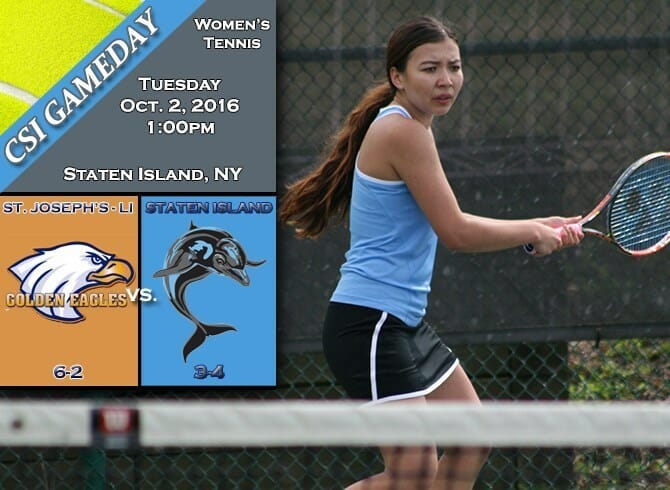 The College of Staten Island women’s tennis team saw their mid-week tilt against Farmingdale State canceled, and now they hope that Mother Nature will stay away long enough to allow them to play the Golden Eagles of St. Joseph’s College of Long Island.  First serve is scheduled for 1:00pm at the CSI Tennis Center.

CSI vs. ST. JOSEPH’S COLLEGE (LI) AT-A-GLANCE
Matchup:  CSI (3-4 Overall, 2-1 CUNYAC) vs. St. Joseph’s College – LI (6-2 Overall, 4-1 Skyline)
Where: CSI Tennis Center – 2800 Victory Boulevard, Staten Island, NY
First Serve: 1:00pm
Last Year’s Result:  SJC won, 5-4
Players to Watch (CSI):  Freshman Tristiana Adragna has been very good as of late and posted one of only two wins in the tough loss in CSI’s last match against Baruch.  She is 4-3 overall this season, as is senior Michelle Kushnir.  Freshman Dana Friedman did not play against Baruch on Tuesday.  She is on a personal three-match tear, and is sporting a 3-2 overall record.
Players to Watch (SJC-LI): The Eagles are getting great production from everywhere in their lineup.  Victoria Panicola leads the way with a personal 7-1 overall singles record with a 4-1 mark at No. 2 alone.  Kerri McMahon sports an 8-0 mark having played Nos. 3-5 this season.  Emily Portal provides plenty of pop in the bottom of the order, sporting a 5-1 mark, all at No. 6 Singles.
News and Notes:  This has been a good series in recent years, as the teams have split the last two meetings while the two teams shared a 4-4 unfinished tie back in 2013.  Before that, SJC had won five straight in the series from 2007-2011.  Last year was a very close, 5-4, decision for the Eagles in a match played in Patchogue.  The Eagles have won a couple of straight matches coming in, including a gritty 5-4 win over Yeshiva, a team that defeated CSI, 8-1 earlier this year.  The two teams have also sported wins against York College and Sarah Lawrence College.  The Dolphins have dropped two straight since winning three in a row.