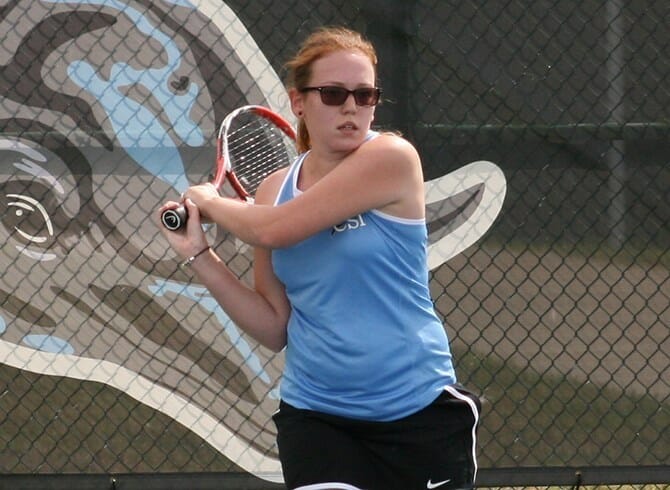 The College of Staten Island women’s tennis squad broke up their three-game skid in a big way this afternoon, earning an important, 5-4, win over John Jay College as part of CUNYAC play at the National Tennis Center in Flushing Meadows.  The win lifted the Dolphins to 4-5 overall but more importantly, 3-1 within the conference, while the Bloodhounds fell to 3-3, 3-1, respectively.  Both teams are now tied for second place in the CUNYAC standings.

Play started with doubles, and it was here that CSI would take a narrow 2-1 lead that would hold up the rest of the way.  John Jay was able to score an 8-2 win in the top flight with Bernarda Reyes and Rageene Berry, but CSI was able to counter with two relatively lop-sided wins at Nos. 2-3.  In the third spot, the tandem of Tristiana Adragna and Viktoriya Volkova were sensational in an 8-0 win, while at the key No. 2 flight, the team of Michelle Kushnir and Dana Friedman was able to register an 8-2 win of their own.

Play then shifted to singles and CSI only needed a split.  It would prove to be awful close from there.  Playing without their top player, John Jay was able to score wins at Nos. 1-2 singles, but CSI’s Adragna, the two-time defending CUNYAC Rookie of the week countered with a 6-0, 6-1 win over JJC’s Gabriella Baez.  Further down in the lineup, CSI’s Guetanie Romain scored a heavy, 6-0, 6-0, win over Rachael Clemons.

John Jay needed two wins to make the comeback complete, and they got one at No. 4, where Angelica Pena was able to outlast Volkova, 6-2, 4-6, 7-5.  That left all eyes at the No. 5 position, where CSI’s Diana Sanchez was playing in only her second collegiate match against JJC’s Dominique Dawkins.

In the first set, Dawkins was crisp in a 6-3 win, but Sanchez held her composure, and knocked the junior back with a 6-2 win to even things up.  Down to a final, deciding set, Sanchez was firing on all cylinders, and scored a 6-1 winner to seal the win for the Dolphins.

The Dolphins will need to follow with another match tomorrow on the road, as they will travel to Lehman College for another important test that will be sure to hold important playoff positioning.  First serve is scheduled for 3:30pm.