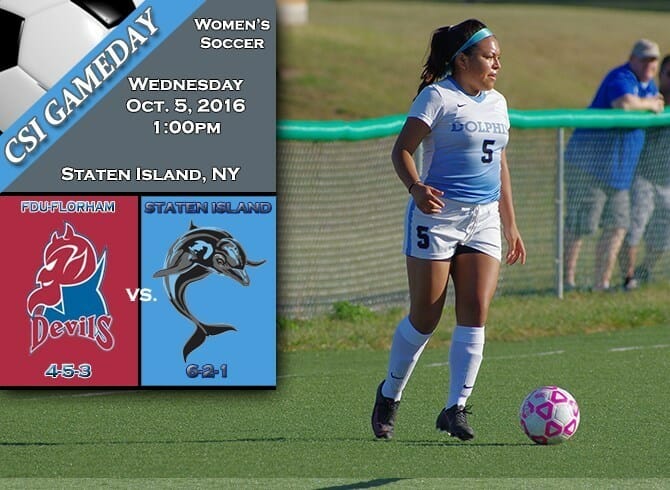 The College of Staten Island women’s soccer squad is back in action this afternoon after a long lay-off, hosting FDU-Florham in a non-conference affair at 1:00pm at the CSI Soccer Complex as part of a CSI soccer doubleheader.  The Dolphins are 6-2-1 entering the game, but are coming off of a loss to Montclair State 10 days ago, so they are anxiously awaiting a return to the pitch today.

CSI vs. FDU-FLORHAM AT-A-GLANCE
Matchup:  CSI (6-2-1 Overall, 2-0 CUNYAC) vs. FDU-Florham (4-5-3 Overall, 0-1 MAC)
Where: CSI Soccer Complex – 2800 Victory Boulevard, Staten Island, NY
Live Video:  http://www.csidolphins.com/CSISportsNet
Live Stats:  http://www.sidearmstats.com/montclair/wsoc/
All-Time Series:  FDU leads, 5-0
Last Meeting:  2010 – FDU won, 9-0
Players to Watch (CSI):   CSI freshman Krista Anson scored CSI’s only goal in the loss to Montclair State next week, and she is second on the team with four goals having missed CSI’s first three games of the season.  Jennifer Cosenza is the team leader with 6 goals while Krystina Rodriguez paces CSI with 6 assists.  Defensively, two-time CUNYAC Defender of the Week Catherine Mulligan will try to keep FDU off of the register while freshman keeper Nicole Mignone has made 18 saves and has five solo shutouts this season.
Players to Watch (FDU): Brittini Calleo has the team lead with five goals through 12 games played.  She also paces the team with three assists and a healthy 44 shots.  Like the Dolphins, FDU is led by a great defensive line and they have allowed just 11 goals this season.  Missy Quinn is a dynamic defender/midfielder who has held things down in the back along with keeper Annie George, who sports a 0.89 goals against average with a heavy .864 save percentage.
News and Notes: This has been a series owned by the Devils, as they have never dropped a game to CSI, winning all five previous matches by a combined 25-0 score.  CSI is 0-2 all-time at home against FDU, with the last home meeting in the series dating back to 2009, a 4-0 loss. Both of these teams lost, 1-0, to Kean University this season, the only common opponent between the two sides.