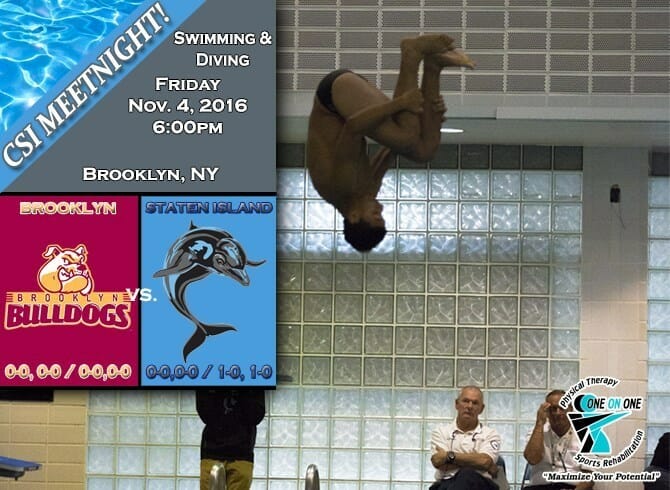 The College of Staten Island men’s and women’s swimming & diving teams will head to Brooklyn, NY tonight for a CUNYAC meet against Brooklyn College at 6pm. For the women, it will be their second meet of the season while tonight’s meet will be the first for the men.

CSI vs. BROOKLYN COLLEGE AT-A-GLANCE
Matchup: CSI Women (1-0, 1-0 CUNYAC), Men (0-0, 0-0 CUNYAC) vs. Brooklyn College Women (0-0, 0-0 CUNYAC), Men (0-0, 0-0 CUNYAC)
Where: West Quad Center Pool – 2900 Bedford Ave, Brooklyn, NY
Meet Time: 6:00 pm
Last Year’s Result:  Women won 123-49, Men won 150-80
Swimmers to Watch (CSI): Tim Sweeney will enter his senior season looking to once again make an impact on the league and his team. Sweeney currently holds six CUNYAC records and 9 CSI school records.  On the boards for the men it will be the El Haddad brothers taking control and handing the Dolphins some extra points.  For the women, Ewa Wojciechowska continues to lead the way in the lanes for the Dolphins as she went 3-for-3 with first place finishes in their meet on Monday.  Nouran Abualam put on a great performance on the boards in her first collegiate showing against John Jay College, racking up a total of 143.15 points on the 1 meter diving, and 150.35 on the 3 meter diving.
Swimmers to Watch (BC): Hugo Meza was able to capture a first place finish against the Dolphins last season with a time of 1:04.32 in the 100 yard butterfly.  Kevin Leung added some help for the Bulldogs on the boards, picking up a pair of second place finishes.  Valerie Vassilieva was able to go toe-to-toe with Wojciechowska last season and will be a matchup to watch in the pool during tonight’s meet.
News and Notes: The last time the Dolphins lost to the Bulldogs on the men’s side was back in the 2012-13 season by a score of 82-109.  Since that defeat the Dolphins have dominated the Bulldogs and will look to continue that tonight.  On the women’s side, Staten Island has never lost to Brooklyn College since the Bulldogs first established a program in the 2010-11 season.