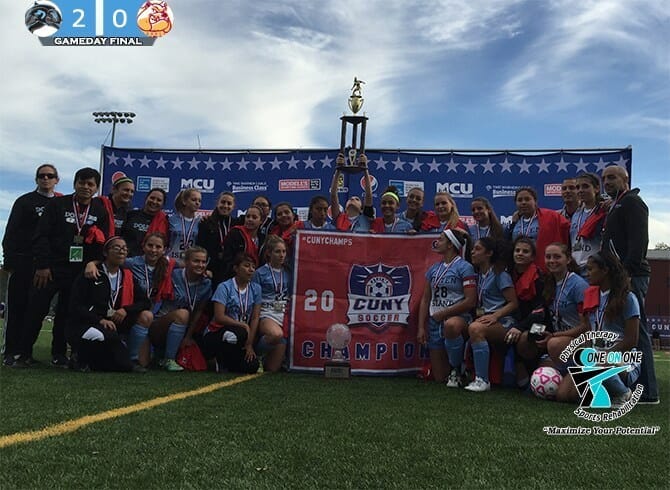 POST GAME INTERVIEW – GAME VIDEO – The College of Staten Island women’s soccer team won the City University of New York Championship for the second year in a row with a 2-0 win over Brooklyn College this afternoon in Brooklyn, NY. The win bumps the Dolphins up to 12-4-2 on the year and puts them in the NCAA DIII Tournament, also for the second straight year.

Kaitlin Russo was awarded the CUNYAC Finals MVP for her game winning goal in today’s game. Russo played 37 minutes and tallied two shots in the win.

The Dolphins and Bulldogs opened the CUNYAC Finals on a beautiful Spring-like afternoon at Brooklyn College.  Staten Island was anxious to get the first goal of the game and for that were called for an offsides just 30 seconds into the game. The Dolphins’ potent offense was on display this afternoon as the Bulldogs rarely saw the Dolphins’ side of the field.  The constant pressure led to a free kick in the center of the pitch from 25-yards out which gave the Dolphins their first real opportunity of the afternoon.  Krystina Rodriguez would step over the ball and lace one wide left for the games first opportunity on net.

CSI would keep the pressure on the Bulldogs’ back line and not allow them to have time and space to move and pass the ball with ease.  Stephanie LaPointe had a phenomenal game at the center defensive mid position and nearly put the Dolphins up 1-0 15 minutes into the game, however her shot went just over the bar and out for a goal kick. Brooklyn continued to try and find a way to get onto the Dolphins’ side of the field but their attack got thwarted every time by the stout wall of the Dolphins led by Catherine Mulligan.

Russo would check into the game in the 22nd minute along with Krista Anson and their fresh legs really created issues for Brooklyn.  Anson was able to keep star defender Jasmine Fermin occupied which opened up passing lanes for her teammates.  Those distractions led to the first goal of the game when Lauren Smith was able to dribble from the right side of the 18-yard box to the left and slot a beautiful through ball to Russo who one timed a low shot near post.

As the first half began to come to a close the Brooklyn offense had a spark of life and was able to fire off two shots, one of which needed Nicole Mignone to make the save.  That chance was the best opportunity for the Bulldogs all game.

At the half the Dolphins led 8-2 on shots, and were evenly split 1-1 on corner kicks.

The second half was much of the same with the Dolphins dominating the possession which started to frustrate the Bulldogs as they started to commit more fouls.  Adrianna Parello is normally reserved to the back line of the Dolphins found herself with the ball from 25-yards out and launched a shot that bounced off the cross bar.  The physical play by Brooklyn led to Leslie Gomez receiving a yellow card.  That foul almost gave the Dolphins their second goal of the game as Rodriguez uncorked an absolute rocket towards goal from 40 yards out and hit the crossbar back into play.

Rodriguez would have another chance at glory when she received a through ball and found herself one on one with the keeper however she was unable to slot it past her for a goal.  The Bulldogs would clear the ball but only as far as LaPointe who passed the ball to Natalia Sandor.  Sandor would pick up her head and saw that Samantha Rodriguez was off of her line and send in a high shot that would go over her head and into the goal for the second goal of the game.

Staten Island kept the pressure up despite holding a 2-0 lead over the Bulldogs.  Coach Giuseppe Pennetti was able to continue attacking because of how well his defense was playing.  The continued attacking pressure nearly allowed Jennifer Cosenza to put in the third goal of the game however Rodriguez was there to make sure another goal didn’t go in the back of the net.

With just seconds remaining the Dolphins were given a corner kick and it was at that time they knew they had won their second straight CUNYAC title.  With the final blow of the whistle the Dolphins stormed the field and tackled their field players in celebration.

The Dolphins now will wait to see who they play in the NCAA DIII Tournament during the selection show on Monday morning.