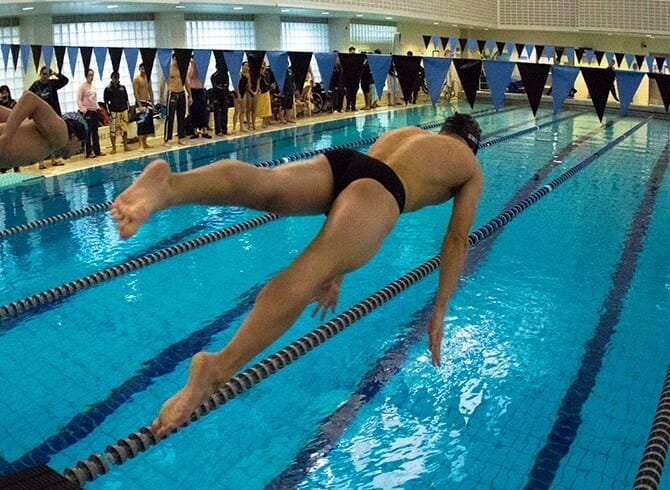 The College of Staten Island men’s and women’s swimming and diving programs get their respective season underway this evening at Brooklyn College, and when they do the three-time defending CUNYAC champs will be looking to usher in another quality campaign that they hope will earn them some hardware by season’s end.

There is plenty of reasons why the Dolphins would feel that way.  last year, the Dolphins did not graduate a single senior and will bring back a heavy cluster of upperclassmen this year that have promised to save their best college swimming and diving for last.  Included within them is CUNYAC Performer of the Year and CSI’s Male Athlete of the Year Timothy Sweeney, who has won every CUNYAC Championship race since his freshman year.  Together with fellow seniors Derek Villa and Chris Pinto, the cluster should help the Dolphins in their quest for a title.

“We have a few four year seniors who’ve been with us the entire way and they’ve all been champions and decorated award winners,” said Ackalitis of his senior group.  “We know that they will be a huge part of what we will do this season and passing the torch to our younger athletes to continue that momentum.”

In addition to senior Santonio Shand, the Dolphins also add juniors Jeff Dietrich, Brandon Lei, and Christopher Sorenson, paired with diving brothers Ayman El Haddad (junior) and Adil El Haddad (sophomore).  The sophomore class represents with reigning CUNYAC Rookie of the Year Nick Defonte, alongside Jonathan Gorinshteyn and Youseff Aly.  All saw significant action in the pool and lent themselves mightily to the Dolphins’ championship run a year ago.

“We definitely have a good amount of talent coming back,” noted the coach.  “We still have a core nucleus that is very strong and we are on solid ground.  The fact that they are all getting better and stronger is a real plus for us.”

CSI’s incoming class includes only two representatives in diver and freestyler Jude Nicholson and freestyle/backstroker Omar Zaky, but Ackalitis is hoping the pair will waste no time making a splash in the waters this year.

“I think they will have an immediate impact and hit the ground running,” Ackalitis said.  “Our hopes are to challenge our returning swimmers and represent deeper at ECAC’s and the Metro Championships.”

Added up, the CSI unit has the makings to be just as potent as they’ve ever been in recent years.  Last year they blew open the CUNYAC Championship on the final two days and never looked back, and Ackalitis hopes that fuels another quality run this time around.

“You can never be too comfortable and we know we have to get better.  Realistically though, we will always try to outdo ourselves and get better and better and I think we can this year.”

All CSI home meets this year are free and PG-CLUE Certified for all students.  In addition, all meets will be live streamed on CSI SportsNet.  The season culminates with the CUNYAC Championships in early-February, followed by the Metro Championship in mid-February and the ECAC Open the last weekend of the same month.