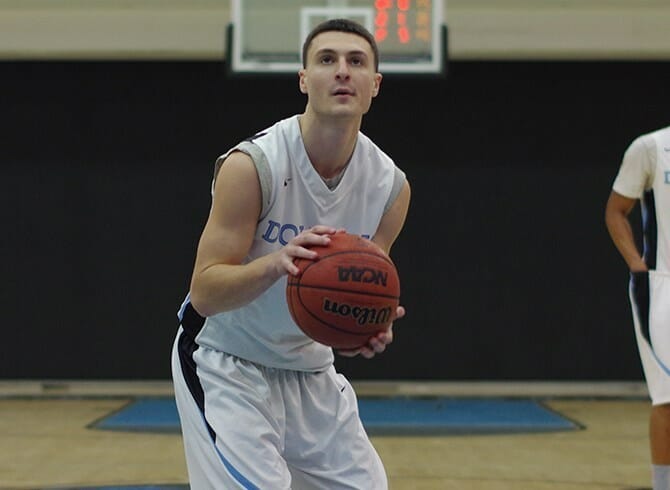 The more things change, the more they stay the same, and folks have gotten used to that when sizing up the College of Staten Island men’s basketball team.  Like teams of the past the Dolphins, even when under the rebuilding tag, have held lofty expectations, and this year’s group is no different.  The pressure to continuously operate under the winning precedents are nothing new to 26-year Head Coach Tony Petosa, and he’s okay with coaching under that umbrella.

“I don’t know if our players feel it as much as I do, but the bottom line is you always want to win,” said Petosa.  “It puts a lot of pressure on us as coaches to try and play with that mindset each game, but it keeps us focused and invested in what we are doing.  Being around the kids and coaching is fun, but winning is what makes everyone work hard.

The Dolphins will have to do the winning this season without two-time defending CUNYAC Player of the Year Will Fonseca, who was the team’s leading scorer and rebounder for the last two years.  Mix in the losses of fellow seniors Thomas Delahanty, Gregory Civiletti, and Kevin Swanberg, and you get a lot of added pressure on current seniors Frank Schettino, the school’s all-time assists leader who has over 1,100 career points and Khaleeq Baum, who as a first-year junior a year ago provided 8.0 points and 4.3 rebounds per game.

The seniors will have help, most notably from downtown threat Edin Bracic and interior presence Kevon Murphy, both juniors who will look to expand their production this season.  They’ll be joined by sophomores Stephen Flagg in the backcourt and Jasin Cobovic, the interior threat who missed all of last season due to injury.  Petosa knows that the returning class will be a focus, not only in their expanded production, but in the locker room value they will bring to the heavy influx of new faces.

“In order for us to compete our returners those guys, including the rest of our returners, will not just have to play hard and play smart, but they will literally need to carry this team until a lot of our new faces can get better enough to help us,” the coach said.  “The way things have gone so far, our returning unit has practiced so much better this year than last year and I think that’s partly because they understand that responsibility.  When you practice well it gives you a lot of things to build off of.”

Ask Petosa, however, and no matter how positive he feels about his returning class, the program’s bread-and-butter has been its ability to bring in bona fide talent year after year.  This year the Dolphins celebrate a large class that includes 9 new faces with the potential for more come midseason.  Of the 9, seven are true freshmen.  Look for athletes like Robert Rossiter, a 6-3, first-year sophomore from Xaverian High School to hit the ground running, followed closely by freshman guard Christian Taylor (Susan E. Wagner High School) and forward Jade Spencer (Samuel L. Tilden High School), who will be instrumental in providing the depth needed for a strong title run.

“I can honestly see us going much deeper on our bench this year and potentially playing up to six first-year players consistently,” said the skipper.  “Of course, we have a long way to go and plenty of our guys need to continue to work on playing at a higher and higher level.  Even with our starters that will be the key.  The better we practice, the better we play, the more players we will be able to use.”

The mix of old and new is a refreshing one for Petosa, one that he hopes leads to exciting gameplay.  Petosa loves to wins game with strong, sound defense, but he admits that the speed of his team could be the greatest asset this year, so don’t be surprised to see the team using that to its advantage each night.

“You prepare for each game individually, but I think if we are doing well it means that we are not hurting ourselves.  We are playing smart, organized basketball that eliminates unforced errors no matter who we are playing,” he explained.  “We need to consistently gets stops on the defensive end and be able to use our speed to score in transition.  Our conference is good and every team we play will have just as much if not more talent than us, so we have to approach, prepare, and play well every single time we get out there.”

The Dolphins will go no breaks when it comes to scheduling.  The Dolphins start on Friday against host Salisbury University for their tip-off-tournament and will welcome in three national powers in time for the annual CSI Tournament of Heroes in late-December.  Other non-conference tests will come against Yeshiva University, Stevens Institute and New Jersey City and of course the highlighted matchup will pre a December 22 showdown with neighboring NCAA Division I Wagner College at the Spiro Center.  Set against the backdrop of a 16-game conference slate, Petosa knows there is no underestimating anyone on the schedule.

“Sometimes it is just the way the chips tend to fall but I think the schedule is tougher this year than it has been and it starts with our tournaments.  When you add a school like Wagner College taking the place of a normal NCAA Division III school and it raises the stakes even higher,” Petosa explained.  “I think our veteran players understand the schedule and see it as a challenge, and it will be their job to help our younger players understand just how tough the schedule is and how different it will be from the scrimmages we’ve played.”

Petosa is understandingly guarded and will never be one for lofty predictions.  Still, the coach would like to see his unit gel this season and make a strong run towards conference and regional legitimacy.

“The most important thing is seeing growth in our players,” he said.  “The more we grow, the higher our expectations can be for this team.  In fact, we may not even be able to judge this year’s team until the end of next year, because maybe that’s when most of our team should be peaking.  Of course, the other intangibles are our opponents.  Depending on how strong or weak they are it will determine how we fare.  This is why we play the game.”

Tickets to CSI home games are $5 for general admission, and free for CSI Students, Faculty and Staff.  Home games are also PG-CLUE Certified for students, and will be broadcast live and free in HD on CSI SportsNet.  Live statistics for each game will also be featured.