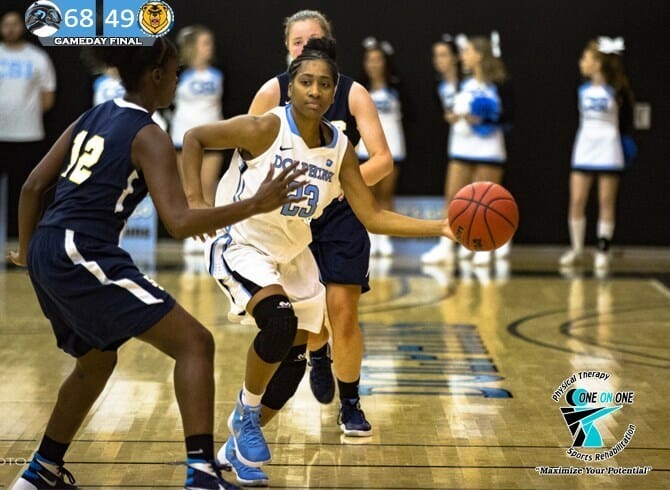 The College of Staten Island women’s basketball team was able to even their record out this afternoon to 1-1 with a 68-49 win over Western New England at the CSI Sports & Recreation Center.  The Golden Bears came into the game 1-1 overall and fell to 1-2 with the loss.

Staten Island and Western New England were tied 25-25 at the half, but a 29-12 third quarter for the hosts propelled them to victory.

Junior Samantha Flecker led the Dolphins with 20 points and seven boards while Angelique Price followed her with 18 points, shooting 7-for-15 from the field, with four assists and two steals.  Coming off the bench Jacquelyn Cali contributed 10 points and 9 rebounds.

The Dolphins out-rebounded the Golden Bears 52-41, and assisted 20 of their 27 made baskets.

Price got the Dolphins rolling almost immediately in today’s game with a three-point basket to put the Dolphins up 3-0. Both teams struggled to find much offense over the next two minutes as Staten Island would go 0-for-3 while the Golden Bears would go 0-for-1 with three turnovers.  The Dolphins were finally able to break the scoreless streak when Flecker found space in the paint and converted an easy layup.

The Golden Bears got their first points of the game with 7:45 left in the first quarter when Meghan Gilhool used her size to get in the lane and lay one up for a basket. Jacquelyn Cali came into the game and made an instant impact, draining a three to extend the Dolphins’ lead to seven over the opposing Golden Bears.  Cali’s basket would mark the last basket CSI would convert in the first quarter as they would go on to go scoreless for over five minutes.

Emily Anderson was able to put her team down just 11-12 after a layup early at the start of the second quarter.  Cali was able to put a stop to the Dolphins’ dry spell with a clutch offensive rebound and layup to put them up three.  Western New England was able to tie it up at 17 when Dorothy O’Neill cashed in on a short range jumper.  Both of the would have missed shots and turnovers over the next two minutes but when the Golden Bears received the ball they were able to make it a one point game before going on to take their first lead of the game.

As the half started to come to a close the Dolphins chipped away at Western New England’s lead and were able to tie up 25-25 at the end of the half. CSI and Western New England were tied 4-4 with points in the paint in the first quarter but the Golden Bears began to use their size more in the second quarter and had 14 of their 25 points from within the paint.

The Dolphins would come out of halftime and explode for a 29-point third quarter which put the game out of reach for the Golden Bears.  Price and Flecker each had an eight point quarter to help the Dolphins push their lead to 17 by the end of the third.  Flecker gave the Dolphins a six point lead with back-to-back three pointers. Christina Pasaturo nearly had a triple-double in this afternoon’s game with 15 points, 9 rebounds and eight assists.  Pasaturo converted a big layup and three-point basket at the end of the third quarter which really deflated the Golden Bears.

After scoring 29 points in the third quarter the Dolphins cooled off and score just 14 points compared to 12 by Western New England.

Victoria Crea was able to give the Dolphins their largest lead of the game with 4:50 remaining with a great drive to the basket.  With Staten Island leading by 22, the Golden Bears began to toss up shots from long range hoping to close the large gap between them and the Dolphins.

With the large lead CSI was content with holding onto the ball and letting the shot clock run down before they would take the shot.  Western New England was unable to recover from the Dolphins’ third quarter explosion and would go on to lose the game by 19.

CSI will return to action on Tuesday, November 22 for another non-conference game against St. Joseph’s College – Brooklyn at 6:00 pm.