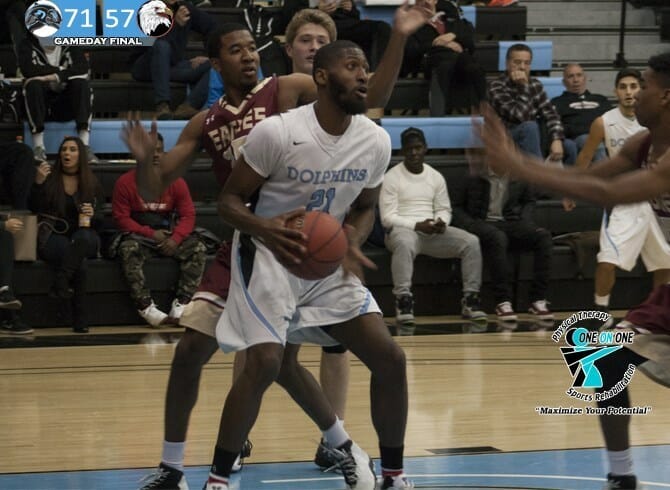 The College of Staten Island men’s basketball team advanced to their own Tournament of Heroes Championship for the seventh consecutive year, turning back Bridgewater College by a 71-57 count at the Sports & Recreation Center this evening.  The Dolphins will face off against Middlebury College tomorrow night, a 77-75 winner over No. 18 Illinois-Wesleyan in the opening leg this evening.  CSI’s yearly tournament serves to honor the memory of former Dolphins Terrance Aiken, Scott Davidson, Tom Hannafin and the many men and women who lost their lives on 9/11.

After a tribute to CSI’s three-former players, the Dolphins got underway against an Eagles team that they had never faced before.  The visitors got a lay-up from Bryce Boggs to start the game, but it would prove to be their only lead of the game as the Dolphins led nearly wire-to-wire.  A three-pointer by Edin Bracic got CSI a 5-2 lead at 17:31, part of a 17-3 run by the Dolphins that encompassed six minutes.  Kevon Murphy tallied a three-point play in the run, while Vincent Dacunto nailed a baseline three to open up a 15-4 lead at the time.

The Dolphins cooled from there from the field, but were exceptional defensively, grabbing a 25-12 lead at 7:36 of the first half on another Dacunto three.  From there, however, Bridgewater fought back and caught fire.  Consecutive lay-ups by Kevin Saylor and Boggs started an 8-0 run, and after CSI stopped the bleeding with a single free-throw, Efe Balfour converted a three-point play by the visitors to close to within 27-24 with 2:56 to play in the half.  CSI regrouped nicely, and after sinking in three freebies, Robert Rossiter turned in a lay-up and Bracic canned another three-ball before the break to put CSI up, 35-26, at intermission.

Both teams tallied up the fouls in the second half that featured a host of stoppages.  The theme of the stanza featured the Eagles knocking down the CSI lead, only to see the Dolphins rise back with important baskets to turn the tide again.  Free throws by Phil Baumgartner helped BC cut the CSI lead to 46-41 with 12:45 left, but CSI then exploded to a 13-3 run, highlighted by consecutive Khaleeq Baum lay-ups on beautiful, no-look, feeders from Frank Schettino.  The Dolphins were on cruise control from there, extending to as many as 19 points before ultimately settling for the 14-point win, 71-57.

CSI shot 43.9% in the contest, holding BC to a chilly 33.9%, a mark that included a 3-18 clip from beyond the arc.  The Dolphins were led by Khaleeq Baum’s 19 points, adding 9 rebounds.  Kevon Murphy tallied 10 rebounds with 7 points, while Schettino bagged 16 points eight rebounds and seven assists.  BC’s Saylor nestled in for 14 points adding six boards while Boggs finalized with 11 points and a team-best seven rebounds.  BC out-rebounded CSI, 43-41, but the Dolphins forced 18 BC turnovers, committing 13 of their own.

The Dolphins will face Middlebury College in the Tournament of Heroes Championship tomorrow evening at 7:30pm.  The Panthers scored a come-from-behind, 77-75, over nationally-ranked Illinois-Wesleyan, thanks to a last second shot by Jack Daly.  The Panthers were up by double-digits in the second half and weathered a potential Titans comeback to clinch.  IWU will face Bridgewater in the Consolation round on Friday evening at 5:30pm.