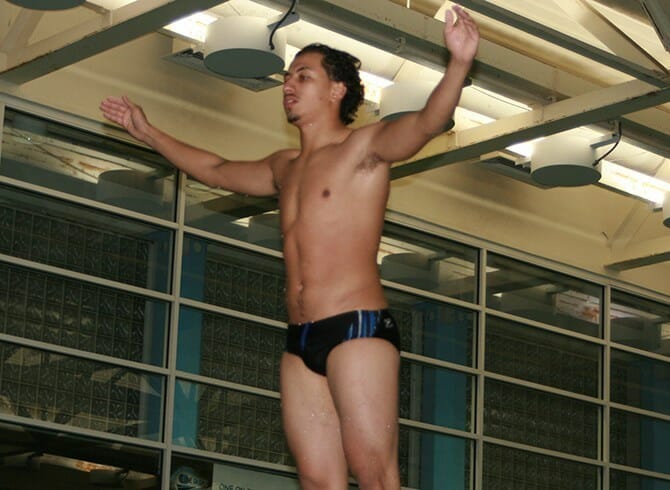 The College of Staten Island men’s and women’s swimming and diving programs celebrated another exciting week of competition with a healthy set of awards bestowed to them by the City University of New York Athletic Conference.  Timothy Sweeney was named Performer of the Week while Omar Zaky was named Rookie of the Week.  On the diving board, both the men’s and the women’s programs won out with Ayman El Haddad winning Diver of the Week on the men’s side and Nouran Abualam winning on the women’s side.

Sweeney swam in six events through two meets last week and earned a first-place finish in all six events which included four individual strokes.  Against St. Joseph’s College (BK) he also set a new pool record in the 100-yard Butterfly with a race time of 51.73.  Two days later against Sarah Lawrence Sweeney posted wins in the 50-yard Freestyle and the 200-yard Butterfly.  For the year, Sweeney leads all Dolphins with 389 total points and has 22 first-place finishes in 24 individual events.

Rounding out the men’s honors was El Haddad’s performance on the diving boards.  CSI only dove against St. Joseph’s, but when they did, El Haddad took first on both the one and three-meter platforms.  He would score 186.60 on the one-meter and followed up with 178.95 on the three-meter.  For the year El Haddad is 9th on the team with 84 points and is 6th on the team with four first place finishes in individual events.

Getting her fifth Diver of the Week honor this week was Abualam who like El Haddad took first place on both platforms during the meet against SJC last Thursday.  Abualam scored a solid 166.90 on the one-meter and a 120.00 on the three-meter, good enough for gold on both.  For the year, Abualam is 6th on the team with 135 points collected this year and her 9 first-place finishes in individual events are tied for second on the team.

The Dolphins are back in action tonight, taking to the road waters to face the Panthers of Adelphi University at 6pm.