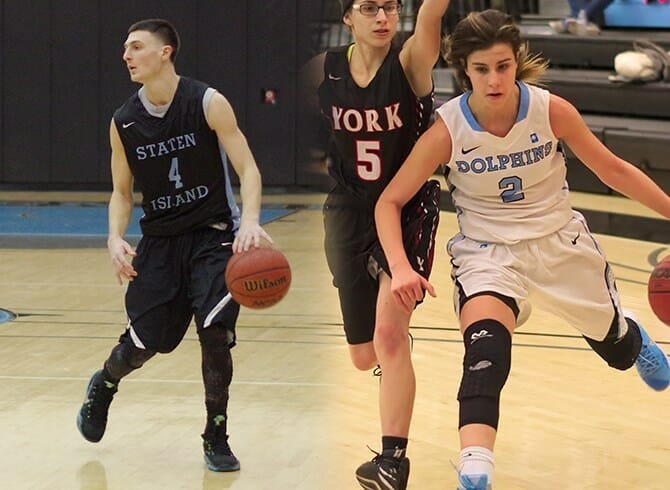 College of Staten Island basketball back court duo Frank Schettino and Christina Pasaturo scored a CUNYAC Player of the Week hat trick, earning the laurels for the third straight week, the conference announced yesterday.  On top of that Schettino won his second Metropolitan Basketball Writers Association Player of the Week honors as well for NCAA Division III, concluding a sensational week of activity.

Schettino is making it near impossible for others to gain the spotlight putting up gaudy numbers while the Dolphins have continues to roll, winning seven-straight.  In three games last week, Schettino became the first NCAA Division III basketball player to post two triple-doubles this season, when he dumped 17 points, 14 rebounds, and 13 assists into the boxscore in a road win over John Jay College.  Two days later, Schettino led the Dolphins to a come-from-behind road win over CCNY, tying his own school-record with 43 points in the 78-74 win.

Schettino is averaging 17.7 points this season to go with 6.8 rebounds per contest and a total of 168, the highest total in the nation and good for second in the country at 8.8 per game, the highest clip of his career.  He is also the nation’s leader in free-throws attempted and his 50 steals rank fifth nationally.

On the women’s end of the floor, Pasaturo has been lights-out for the first-place Dolphins, who are now winners of six-straight.  Pasaturo put up 29 points, 10 rebounds and seven assists in a lop-sided win over John Jay last week and then followed up with a 28-point, seven assist performance two days later against CCNY, another CSI victory.  For the season Pasaturo is averaging 22.3 points per game to go with 6.7 rebounds and a team high 84 assists and 59 steals.  She leads the nation in three-pointers made this season with 70, pouring in 12 last week alone.

Both basketball teams will take their guards into battle again on the road on Wednesday, when the teams square off against Baruch College to continue conference play.  The women tip at 5:30pm, while the men jump at 7:30pm.