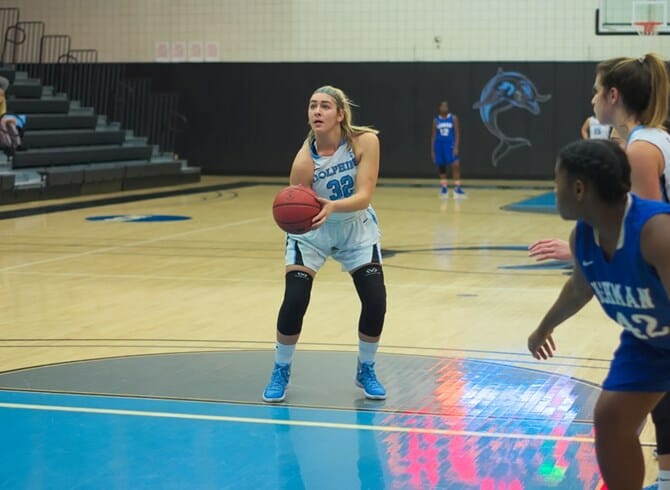 The College of Staten Island women’s basketball team continued their red-hot steak and did it against their conference rivals, taking a lop-sided, 83-60, win over City College of New York at CCNY’s Nat Holman Gymnasium.  The win was the sixth-straight for CSI, and they improved to 14-4 overall and 9-1 within the CUNYAC.  The Beavers, who lost by 20 to CSI earlier this season, fell to 7-11, 3-7, respectively.

Two jumpers by Alexis Akridge gave CCNY an early 4-2 edge, but CSI quickly retaliated with a Rosa Perone and Christina Pasaturo lay-up to take the lead back.  The teams went back-and-forth that way until the 5:49 mark of the first, when CSI ripped off a 13-0 run, highlighted by two Pasaturo three’s and two Samantha Flecker inside drives.  Then, in the final 1:15 of the stanza, CSI raced to score 9 of the half’s last 11 points, ending with yet another Pasaturo three to give CSI a 34-15 lead at the end of the first 10 minutes.

Another 10-0 run to start the second quarter ballooned CSI’s lead to 45-15, a run that featured two Victoria Crea three’s.  After CCNY cut the lead to 21, 45-24, CSI again surged, scoring a 12-0 run, aided by an Angelique Price three-point place.  CCNY scored the last five points of the half, but still the Dolphins held a commanding 57-29 edge.

That lead proved insurmountable, as the Dolphins eased their way into the third and fourth quarters comfortably ahead.  Another Crea three gave CSI a 32-point edge in the third before CCNY closed to a 77-49 deficit going into the fourth.

The Dolphins  cooled considerably from there, scoring only six points in the final quarter, and only a single field goal in the game’s final 9 minutes. Marissa Olsen closed CCNY to within 81-60 at one point, but the Beavers also struggled, not scoring in the final 3:53 to see CSI ultimately win, 83-60.

Pasaturo led the way with 28 points, also scoring six points and seven assists.  Crea would finalize with 18 points while Perone and Price each tallied 13.  Akridge was tops for CCNY with a strong 27-point, 14-rebound performance.  CSI shot over 51% in the game, holding CCNY to a chilly, 37.7%.

Up next for the Dolphins will be their final non-conference game of the season, traveling to Drew University for a 7pm tilt on Monday, January 23.