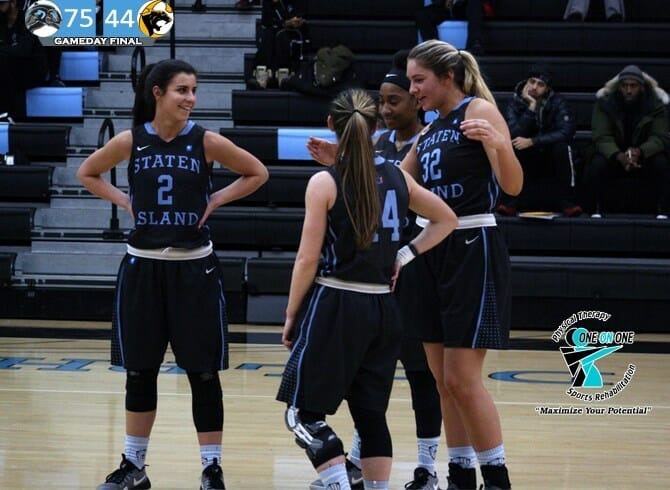 GAME VIDEO – The College of Staten Island women’s basketball team got off to a big lead early, then cruised to a 75-44 win over visiting Medgar Evers College at the Sports & Recreation Center, running their win streak to a season-long 10 games.  The Dolphins improved to 18-4 overall at 12-1 within the CUNYAC, while the Cougars fell to 1-20, 1-11, respectively.

The Dolphins led from start to finish, opening up a quick, 10-0 lead over the game’s first 4:50.  Two baskets by Samantha Flecker, included a three-pointer, guided the way.  After the teams pawed back and forth, the Dolphins again surged ahead thanks to an 8-0 spurt to end the first quarter, a run that included four-straight Christina Pasaturo points to give CSI a commanding, 24-6, lead at the end of the first frame.

CSI would surge the lead to 20 in the second frame, but both teams at times struggled from the floor.  CSI extended to a 38-17 lead on a Pasaturo three, and after a pair of Janaisha Carrington free-throws knocked the lead to 38-21, CSI finished the final two minutes of the half on a 5-1 run to take a 43-22 lead into the lockers.

The Dolphins then raced to a 10-2 run to open the second half, seemingly putting the game on ice, as Flecker connected on three three-pointers to open the scoring. Just when it seemed like the Dolphins would blow the game completely open, the team went a bit cold from the field, allowing MEC to finish the quarter on a modest, 6-2, spurt to come back to within 21 after three, 59-38.

Leaving little to chance, the Dolphins were crisp in the fourth to put the game away.  An 8-2 opening run, fueled by five straight Victoria Crea points game CSI a 67-40 lead, and later, CSI extended to a game-high 33 thanks to Elena Demontreaux and Nicole Imbesi free-throws.

CSI shot just 33.3% tonight, but were aided by 39 MEC turnovers which helped them put up 29 more shots than the Cougars, and MEC shot a chilly 29.1% as well.  Pasaturo led the way with 23 points adding seven rebounds and eight steals, while Flecker added 16 points and seven rebounds.  CSI’s 26 total steals tonight were their highest total of the season.  MEC was led by Cyndi Whyte’s 14 points, while Elesha Dieudonne paced the team with 13 points and a whopping 20 rebounds.

CSI will take their win streak on the line for Saturday’s showdown with Hunter College at the Sports & Recreation Center, at 3pm.