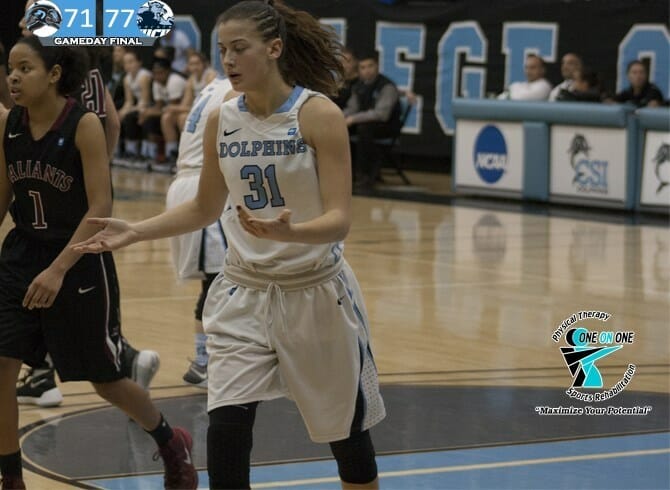 The College of Staten Island women’s basketball team suffered just their second loss at the CSI Sports & Recreation Center this season after a 71-77 defeat at the hands of Baruch College.  Tonight’s loss was the first loss for the Dolphins in CUNYAC play, dropping them to 8-4 overall and 4-1 in the CUNYAC while keeping the Bearcats perfect at 5-6 overall and 4-0 in the CUNYAC.

The Dolphins scored their second lowest point total in the second quarter this season, collecting just seven points in the 10 minutes of action while the Bearcats were able to tally 22 which burst the game wide open for the Bearcats. The Dolphins struggled to defend the arc tonight as the Bearcats sunk 41.7% of their three point attempts which allowed to keep the Dolphins at bay.

Staten Island held the lead in the first quarter as they were able to get inside and convert their shots but a defensive adjustment by the Bearcats stopped the Dolphins’ high scoring offense.  CSI surrendered the lead for good in the second quarter when Verionica Ganzi drained a three to put her team up 27-24 over the host Dolphins. Pasaturo was able to find some room inside and lay one in to make it a one point game.  That would be the closest the Dolphins would come to regaining the lead in this game as the Bearcats would go on an 11-2 run to take a 38-28 lead.

Shannon Barrett terrorized the Dolphins inside tonight as Staten Island was unable to match up with her size.  Barrett would finish with 12 points and 13 rebounds.

At the half CSI trailed Baruch 26-34.  The Dolphins earn their wins from behind the arc but they had trouble finding the bottom of the net in the first half of tonight’s game shooting just 20% (2-10).  The Bearcats were able to have some success, shooting 38% (5-13) from range. Baruch held the edge in second chance points, 11-5, while CSI held a 6-2 lead in fast break points.

The third quarter has been good to the Dolphins this season as they normally come out of the locker room and explode for 20+ points, however, tonight things would not go their way.  The Dolphins would come out in the third quarter and score just 13 points while Kristen Podlovits, and Ganzi continued to find open space from range.

Down by 19 headed into the final stanza the Dolphins knew they had to change up their offense to get their playmakers into scoring position.  Coach Tim Shanahan was able to fire up his team in the fourth quarter enroute to a 32-point outing.  Victoria Crea was able to get going, using her quick first step to get by the defender and to the hoop.

CSI chipped away at the Bearcats’ lead all quarter and brought it within four with 58 seconds remaining after a 10-0 run. Crea finished the game with 14 points, 10 of which came in the fourth quarter where she scored all 10 of the points on that late 10-0 run.  Over that stretch Crea also collected two steals while Nihada Bracic added one of her own.

The women had to resort to fouling the Bearcats to put them at the line in hopes they would miss so they could race down the floor and continue shrinking the lead.  Things would not go in the Dolphins’ favor as Baruch would go 4-4 down the stretch to seal the deal to keep their record unblemished in the CUNYAC.

Podlovits would finish the game with 26 points and five rebounds while Ganzi led all scorers with 28 points and three rebounds.

The Dolphins will return to action on Friday where they will travel to Brooklyn, NY to take on CUNYAC opponents Medgar Evers College at 6pm.