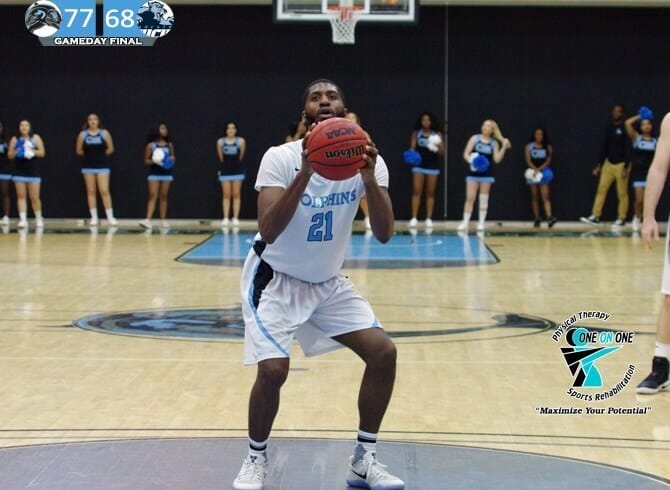 POSTGAME INTERVIEW – GAME FILM – In a battle pitting the conference two unbeaten teams against one-another, the College of Staten Island men’s basketball team came from behind to score a 77-68 win over visiting Baruch College at the Sports & Recreation Center as part of CUNYAC play.  The Dolphins improved to 7-6 overall and 5-0 inside the CUNYAC while the Bearcats fell to 9-4 overall and 4-1 in conference play.

The win for the Dolphins was not easy, as the team fell behind by as many as 12 points in the first half, and trailed by six at the break before taking control late in the game and holding on.  In the early stages, the teams traded punches as Baruch nursed a modest 11-10 edge after six minutes had been played.  Cold shooting then haunted the Dolphins and Baruch took advantage, staging a 14-3 run over the next five minutes, powered by five straight Doyin Isaac points to kick it off.  That gave Baruch a 25-13 lead.  A three-point play and then another bucket by junior Kevon Murphy cut into the lead, but Baruch took a 33-22 lead with 2:30 left in the half thanks to a Chimaechi Ekekeugbor lay-up.

After a 1-8 start from the field, CSI senior Frank Schettino then caught fire to end the first half.  The guard scored seven of the Dolphins’ last 9 points of the half, including a long three-pointer as time expired in the half to close CSI to within 39-33 at the half.

After a Khaleeq Baum free-throw, Schettino net a three to start the second half, setting the stage for another back-and-forth intro to the stanza.  CSI narrowed the Baruch lead down to a single basket on four occasions, and the Dolphins finally overturned the deficit with a Robert Rossiter three that gave CSI a 44-43 lead with 16:09 remaining.

Baruch did not go quietly, and Ekekeugbor added two straight baskets to put BC back up by as many as six, 52-46, with just over 11 minutes to play.  CSI responded, however, and after coming back to tie twice, CSI again took the lead on two free-throws by Edin Bracic to make it 59-57 at 7:27.  It contributed to a 13-2 run that eventually saw CSI take a 65-56 lead with 4:45 to go, powered by three Murphy lay-ups, part of a career-high 28 points for the junior.  CSI powered up by 10 on a couple of occasions, and were able to weather BC comeback attempts inside the final two minutes thanks to a solid 8-11 shooting from the free-throw line in that span.

Murphy would add 12 rebounds to his point total, which came on 11-14 shooting from the floor.  Schettino was just as strong, pouring in 21 points and a game-high 13 assists, falling two rebounds short of a triple double.  Bracic and Rossiter added 10 points apiece.  Ekekeugbor net 27 points for BC on 11-17 shooting from the floor, a mark that included 12 rebounds and a 3-3 mark from behind the arc.  Doyin Isaac added 17 points, three assists and three steals.  CSI finished with a 34-28 edge in rebounds and a +4 in the turnover column.  CSI also enjoyed a 12-4 edge in second-chance points.

The Dolphins will now take to the road for a pair of conference contests, the first of which comes against Medgar Evers College on Friday at 8pm in Brooklyn.