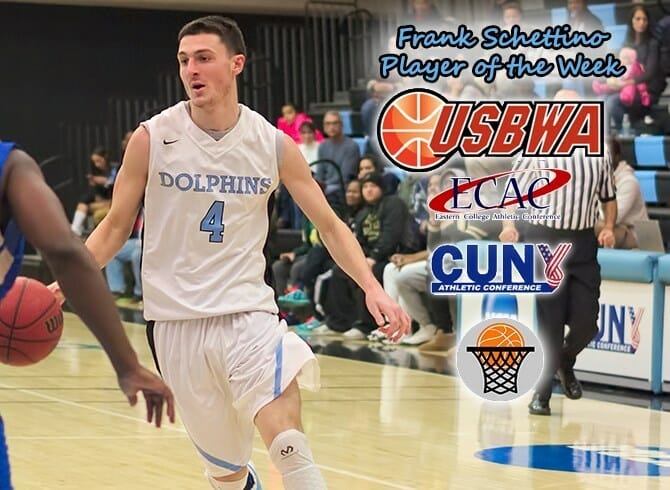 “I am so honored to get these recognition,” said Schettino.  “Especially since this is my senior and last year I want it to be the best one, and this recognition is really terrific.”

A former ECAC Metro Rookie of the Year and All-Star, Schettino has decorated the ECAC weekly awards in the past, but the USBWA recognition is the first such award won by the senior.  Founded in 1956, the USBWA is one of the nation’s most influential basketball organizations, and awards weekly and yearly awards to all deserving individuals in all NCAA Divisions.

Schettino was dynamite for the Dolphins, who are unblemished in conference play with a pair of wins last week against both previously unbeaten Baruch College and Medgar Evers College.  Schettino averaged 19.5 points, 10 rebounds, and a whopping 15 assists per game on the week.  Against MEC the hardwood quarterback dished out a school-record 17 assists to go with 18 points and 12 rebounds, making it the fifth triple-double all season in NCAA Division III men’s basketball, doing it in just 31 minutes on the court.  Schettino, who tied the single game assists record with 14 earlier this season and hit lucky number 13 a number of times, admitted to knowing he was getting close.

“That’s all my teammates,” he commented.  “They’re the ones that need to finish and when you see those guys making the lay-ups, I could tell I was getting close.”  For Schettino logging the triple-double was probably the tougher feat considering it involved getting double-digit rebounds.  “Getting those rebounds is the hardest part. Most of the time I’m just trying to get to open spaces past the big guys to pick them up,” he said with a laugh.

The week contributed to a bigger season for the Dolphins and Schettino.  The senior has banked a CSI best 16.1 points per game, a mark more impressive given the fact that he leads the entire nation in total assists and assists per game with 120 and 8.6 respectively.

“Our big guys especially are getting it done,” he remarked.  “Other teams see I am the leading scorer and they are putting two and three bodies towards me and my job is then to get others the ball, and those guys are converting those baskets and making it look easy.  They deserve most of the credit.”

On top of all of his other statistics, Schettino also ranks eighth nationally in total steals with 42.  He recognizes that despite CSI’s hot start, the team can take little for granted.

“The second half of the season is going to be the same as the first,” he noted.  “Anyone can beat anyone.  You have to come to play every day.  Our goal is to not take anyone or anything lightly.  We are hoping for a championship but so are the other teams so we have to stay sharp.”

The Dolphins will look to stay sharp tonight when they travel to face Hunter College in Manhattan at 7pm.  After that they return home to face Brooklyn College on Saturday at 3pm.